Aren Mkrtchyan: Arthur Vanetsyan is responsible for the defeat of the  Armenian national football team with a score of 9: 1 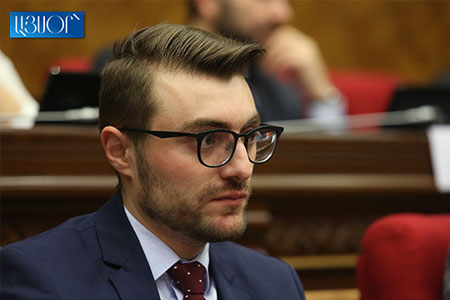 ArmInfo. Head of the Football Federation of Armenia Artur Vanetsyan is responsible for the defeat of the Armenian national football team with a score of 9: 1. MP from  the My Step faction, member of the FFA Executive Committee Aren  Mkrtchyan announced this to journalists on November 19.

To recall, the day before, in the last round of the Euro 2020  qualifying round, the Armenian team lost in the away match to the  Italian team with a score of 9: 1.  <We consider unacceptable what  has been going on in the FFA recently, and earlier our position  regarding this was voiced at a closed meeting of the executive  committee. This, in particular, concerns the attempt to appoint  Abraham Khashmanyan as the head coach with a gross violation of the  rules, as well as the match- fixing scheme revealed by the NSS (to  which the FFA has not responded for 1.5 years)>, Mkrtchyan noted.

The MP noted that the executive committee had to approve Khashmanyan  as head coach, as the situation developed in the conditions of  deadlines. He recalled that only the head coach can form the national  team, and earlier, due to this problem, the Armenian team was twice  awarded a technical defeat. <We only had one day for this. For the  sake of the national team, the executive committee unanimously voted  for the candidacy of Khashmanyan>, he said.

<Of course, the head coach is responsible for the defeat of the  national team, but he leads the team only the second game. All are  guilty. Football players, coach, executive committee, FFA - all bear  their share of responsibility. But head of the Football Federation of  Armenia Arthur Vanetsyan  is the1st responsible.  That is the opinion  of the Executive Committee. Vanetsyan must answer for the defeat with  a score of 9:  1>, Mkrtchyan emphasized.  Answering a question  regarding his resignation from the post of head of the FFA, the  deputy noted: "This issue is not on our agenda for now."