Investigative Committee: Former Governor of Vayots Dzor region did  not participate in a scirmish in which officer Ara Mkhitaryan was  seriously injured 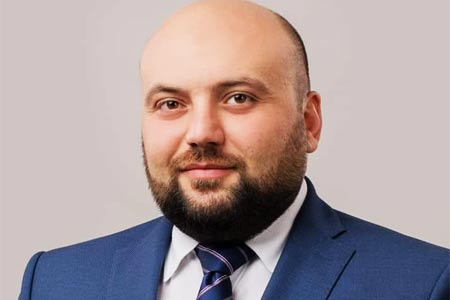 ArmInfo. Former governor of  Vayots Dzor region of Armenia Trdat Sargsyan was not present and did  not participate in the brawl that took place in the city of  Yeghegnadzor on September 17 of this year, as a result of which the  RA Ministry of Defense officer Ara Mkhitaryan suffered.

According to the press service of the Investigative Committee of the  Republic of Armenia, the data obtained in the course of investigative  measures carried out as part of the criminal case on the incident  confirm this. The department reminded that two brothers Harutyun and  Zaven Grigoryans are involved in the case as accused. "The  preliminary investigation found out that Zaven and Harutyun  Grigoryans punched the head of officer Ara Mkhitaryan with fists and  a baton, thereby deliberately causing serious harm to his health.  Both were arrested. Witnesses in the case - Mariam Hunanyan, Zhora  Baghdasaryan, Mkhitar Melkonyan, Levon Harutyunyan in their  testimonies noted that Trdat Sargsyan was present at the scene of the  incident and was inactive, and they confirmed this at the  confrontation with Sargsyan, while Trdat Sargsyan categorically  rejects these allegations, assuring that at the time of the incident  he was at the address "10 Mikoyan str.," the statement reads, while  emphasizing that Sargsyan's testimony confirms both the camera  records at the entrance of the building at 10 Mikoyan's address and  the printout of Trdat Sargsyan's phone calls.

To recall, according to the official report of the Investigative  Committee, on the evening of September 17, during an argument in a  courtyard of a building in the city of Yeghegnadzor, an officer of  the Ministry of Defense received serious injuries. Harutyun  Grigoryan, 28-year-old assistant to the governor of Vayots Dzor,  punched the officer in the head, as a result of which he fell, having  received serious injuries. In the framework of the criminal case,  Harutyun Grigoryan and his brother Zaven were charged with  intentional grievous bodily harm. Both are in custody. Doctors to  this day assess the condition of Lieutenant Colonel of the Ministry  of Defense Ara Mkhitaryan as extremely difficult, he is in a coma.   Relatives and friends of the officer require a fair investigation  from law enforcement agencies. After this incident, Trdat Sargsyan  resigned.