Pashinyan: Armenia is interested in developing relations with  Kazakhstan in bilateral and multilateral formats 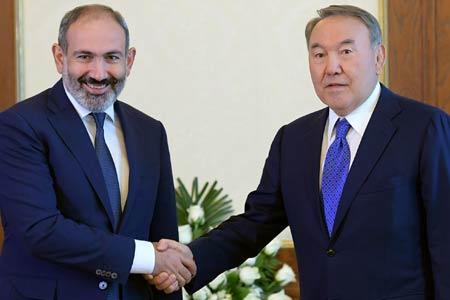 According to the press service of the government, during the meeting,  the Prime Minister noted that Armenia is interested in developing  relations with Kazakhstan in both bilateral and multilateral formats.   According to him, there is considerable potential for deepening  cooperation through the implementation of bilateral programs, as well  as within the framework of the EAEU.

In particular, the prime minister called the construction sector  promising in terms of cooperation. Pashinyan also noted the high  level of Armenia-Kazakhstan dialogue, positively assessing the  official visit of the President of Kazakhstan to the republic planned  for next year.

For her part, Nazarbayeva emphasized that Kazakhstan is interested in  attracting investments from Armenia, indicating science, technology  and agriculture as promising areas for bilateral interaction. She  also expressed satisfaction with the constructive cooperation of the  two countries at international platforms.