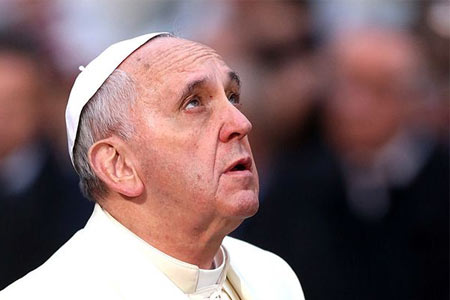 ArmInfo.Pope Francis prays for Armenian Catholic priests killed by ISIS militants in Syria. This is reported by Vatican news.

According to the source, Pope Francis expressed his condolences to  the Armenian Catholic community of Kamyshly in connection with the  tragedy. "I'm thinking with the Armenian Catholic community in  Kamyshly, Syria, where they are going to the funeral of their priest,  father Hovsep Petoyan, who was killed yesterday with his father. I  pray for them, for their relatives and for all Christians in Syria,"  Francis wrote.  On November 11, terrorists attacked a car of priests  heading to Deir Ezor. As a result of the shelling of the car, the  rector of the parish of the Armenian Catholic community of Kamyshly,  father Hovsep Petoyan and his father, priest Abram Petoyan, were  killed, the deacon of the church Fati Sanon was wounded. The  responsibility for the murder of representatives of the Armenian  clergy took ISIS. Official Yerevan condemned this fact and called on  the international community to strictly condemn identity crimes and  persecution.