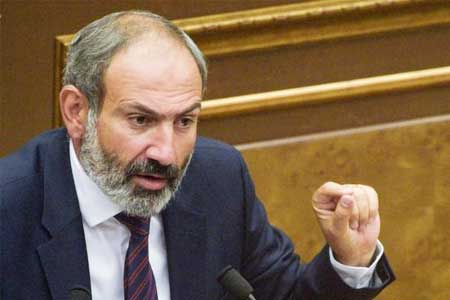 ArmInfo. At a meeting with leaders of secular and religious organizations of the Armenian community of France, Armenian Prime Minister Nikol Pashinyan touched  on the working visit of the Armenian delegation to Paris, discussions  with President Emmanuel Macron, the Armenian foreign policy and the  Karabakh conflict.

The meeting was attended by deputies of the French  parliament of Armenian descent, public and cultural figures,  entrepreneurs.  According to the Prime Minister's press service,  Pashinyan, in particular, noted that it has already become a  tradition when foreign visits are necessarily accompanied by meetings  with representatives of the community, both in narrower and expanded  groups.

"This is an important fact, it reflects the new policy that  the government of the Republic of Armenia pursues in the sphere of  relations between Armenia and the Diaspora, its meaning is to state  the establishment of pan-Armenianism as a priority," he said.   According to him, the meaning of the new policy is adequately  perceived by international partners.

During meetings with President  Macron, as Pashinyan noted, the head of France particularly touched  on the Armenian community in France. "This makes me especially happy  that, for example, the President of France, considers the government  of Armenia, the Republic of Armenia and the Diaspora as one. And  while talking with the President of France, my friend Emmanuel,  constantly wants to emphasize how important and influential the  Armenian community is in France and what a big role she plays in the  public life of the country, in all areas. And it is a great honor for  me when he recalls some of the people who are present tonight. "said  Pashinyan.

According to him, the idea of pan-Armenianism is  extremely important for the Armenian government. Its main idea, as  the prime minister pointed out, is that the borders between the  Republic of Armenia and the Diaspora are removed and when the  Armenians come out as one, "all issues get a different picture, and  all issues become resolved."

"The goal of our government is to create  such a situation - the government of Armenia is the representative of  all Armenians, and this is a decisive factor that will allow real  changes to be made to the historical fate of our country, our people  - to get out of the vicious circle when fate smiles at us and  geopolitical circumstances are favorable for we have statehood, and  when they change, we lose it.  Our task is to get out of this cycle,  and I can say with confidence that today we step out of it, "he said.   As the prime minister noted, after a year and a half of the Cabinet's  activities, there have already been tangible successes in the sphere  of foreign policy. A completely new content is being formed on the  Nagorno-Karabakh issue, which has a direct connection with the real  idea and content of the Nagorno- Karabakh issue. "The most surprising  thing for me, as for the Prime Minister, is that the international  community has lost the idea of the content of the Nagorno-Karabakh  issue, and this is universally presented as a territorial dispute  between Armenia and Azerbaijan," he noted.  As Pashinyan pointed out,  over the past year and a half, the government has been working on the  real content of the Karabakh issue.

"Until recently, it seemed that  we were alone in this conversation, but now I can state that our  words are perceived, understood by the international community, and I  consider this a success," the prime minister said.  Today, as  Pashinyan emphasized, it can be stated that the co-chairs of the OSCE  Minsk Group, in the end, already more deeply perceive and accept the  positions of Armenia.

"They understood their position for them, and  today we can state that the views of Armenia and Artsakh regarding  the settlement of the Karabakh issue are one hundred percent  identical. We never had such a situation, we didn't have such a  situation when the views of Armenia and Artsakh until the last nuance  were identical, or at least they weren't as identical as they are  today, "said the head of the Cabinet.  This means, according to  Pashinyan, it means that the RA is approaching the following  important result - among the Armenian people there is no discussion  of the Karabakh issue in the Armenian reality, and a state will soon  be reached under which the positions of the Armenians in the  settlement of the Karabakh issue will also be identical.  Nikol  Pshainyan noted that over the past year and a half everyone has been  eyewitnesses to some pessimistic assessments. For example, about the  Armenian-Russian relations. "It can be stated that today between the  authorities of Armenia and the Russian Federation there is complete  mutual understanding regarding our relations, content, strategy and  present and future. And I hope that the public statements of the  representatives of the Russian Federation now already make this  reality obvious," he said.  In relations with the European Union, as  Pashinyan noted, there were no big problems, and today they are not.  "The Armenian-Georgian relations, let me assert, have never been at a  higher level.

We have complete mutual understanding with Iran, we  started a strategic dialogue with the USA and there are all signs  that relations with the USA are also very close to an important  breakthrough," said prime.  Speaking about the internal Armenian  reality, the Prime Minister noted that democracy, the rule of law,  protection of human rights, freedom of speech, freedom of citizens,  the power of the people in Armenia have no alternative. "At many  international venues, listening to the speeches of my colleagues, I  stated that they talked about the need to reduce corruption in their  countries. Listening to these speeches, I told myself that this path  cannot be interesting to us, because we should not speak to reduce  corruption, but to eradicate it, " - said Pashinyan, emphasizing that  the RA is clearly following this path, "and not a single ex, current  or future official can hope that he can remain outside this logic."

I want to assure that we will provide this service with  the maximum strength of our capabilities. The rest is a matter of  citizens's assessment, "said the Prime Minister of Armenia.