Patrushev:  A maater of  particular concern is is the formation of  laboratories in the CIS countries by Pentagon,  where they can create  biological weapons 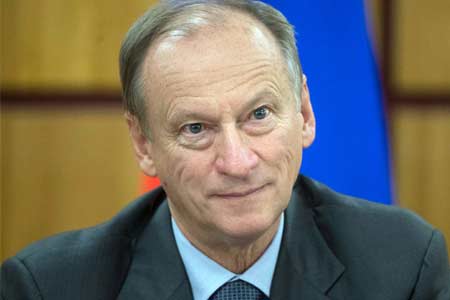 ArmInfo.Of particular concern to the Pentagon is the formation of laboratories in the CIS countries where they can create biological weapons, said Secretary of  the Russian Security Council Nikolai Patrushev.

"Of particular concern is the Pentagon's efforts to create biological  laboratories in the CIS countries, which are conducting research on  infectious diseases and can create biological weapons," writes  Patrushev in his article "Russia's Security in the Modern World" in  the "Russian to the newspaper. "

"In this regard, there is an increasing need for close coordination  with our partners, including through the conclusion of bilateral  agreements on ensuring biosafety," Patrushev added, RIA Novosti  reports.  It should be noted that Moscow and Yerevan began work on  the development of a Memorandum on the admission of Russian  specialists to a biological laboratory in Armenia last summer. Now it  is finished.  According to the heads of the Foreign Ministers of  Armenia and Russia the day before in Yerevan, the document is being  approved by the relevant departments of the two countries.

Recall that in 2016, with the funding of the US Department of  Defense, three laboratories were opened in Armenia - in Yerevan,  Gyumri and Ijevan. After their discovery in the Armenian and Russian  media, publications periodically receive widespread publicity that  these laboratories are dual-use facilities and can be used for  military purposes to create and manufacture biological weapons. The  US Department of Defense allocated $ 15.5 million for the creation of  a reference laboratory in Yerevan, and the total funding amounted to  $ 18 million.

In Yerevan, for the full construction of the reference laboratory of  the food safety department for especially dangerous pathogens of the  Ministry of Agriculture, $ 4.1 million was invested, and the US  government invested $ 9.8 million for the repair of the reference  laboratory of the "National Center for Disease Control and  Prevention" of the Ministry of Health of Armenia, ensuring the  seismic stability of the building and creating the necessary  laboratory infrastructure. An additional $ 1.7 million for both  laboratories was allocated for the purchase of new equipment and  furniture.