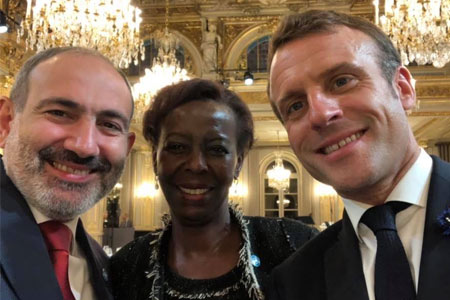 ArmInfo. Prime Minister Nikol Pashinyan and his wife Anna Hakobyan arrived on a working visit to France on the eve to participate in the Second Paris Peace Forum and  the 40th General Conference of UNESCO.

According to the Prime Minister's press service, on the evening of  November 11, Prime Minister Pashinyan visited the Champs Elysees,  where he attended an official reception on behalf of French President  Emmanuel Macron in honor of the heads of state and government  participating in the Second Paris Peace Forum.

At the Champs Elysees, the Prime Minister of the Republic of Armenia  was met by Emmanuel Macron.  The official reception is also attended  by UN Secretary General Antonio Guterres, President of the European  Commission Ursula von der Leyen, President of the Democratic Republic  of the Congo Felix Chisekedi, Deputy Chairman of the State Council of  the PRC Wang Kishan, Secretary General of the International  Organization of Francophonie Louise Mushikivabo, UNESCO Secretary  General Audrey Azule and others.

On November 12, the Prime Minister of Armenia will attend the opening  of the Second Paris Peace Forum and a thematic discussion at the  event, during which he will deliver a speech. It is planned that  Prime Minister Pashinyan will present a symbolic gift to the Library  of the Paris Peace Forum.  Within the framework of his visit to  Paris, the Prime Minister of Armenia will also visit the office of  the International Organization of Francophonie and will meet with the  Secretary General of the IOF Louise Mushikivabo.

The visit of the Prime Minister and his wife to UNESCO headquarters  is planned and their participation in the 40th session of the General  Conference of UNESCO. Prime Minister Pashinyan will deliver a speech  as part of the thematic discussion of the conference. The Prime  Minister will also meet with UNESCO Secretary General Audrey Azoule  and give an interview to the UNESCO Press Service.