Sergey Lavrov: With the assistance of Iran and Russia, the legitimate  Syrian authorities failed to stop the "terrorist infection" 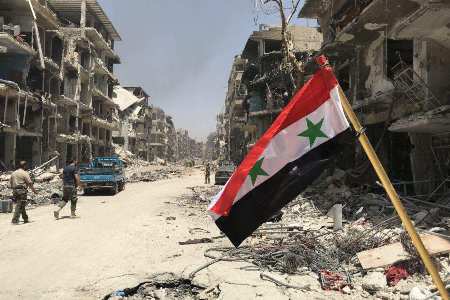 ArmInfo.With the  assistance of Iran and Russia, the legitimate Syrian authorities  failed to stop the "terrorist infection." At a meeting with students  in Yerevan at the Museum-Institute of Ancient Manuscripts  "Matenadaran", Russian Minister of Foreign Affairs Sergey Lavrov  said, touching the situation in Syria.

"Terrorism has been eradicated practically throughout Syria, there  remains only a hotbed in the Idlib zone, which, by agreement between  Russia and Turkey, should be destroyed, and the second hotbed  remained on the eastern bank of the Euphrates River, primarily due to  the fact that it remains absolutely not the legitimate presence of  the United States. Syria is now a country where the interests of  almost all the players clash, but this is not the collapse of the  country, and all efforts are aimed at preserving the Syria and  respecting its sovereignty and territorial integrity, " the head of  the Russian foreign affairs minded.

At the same time, Lavrov stated that they tried to push Syria onto  the sad path of Iraq and Libya, which were destroyed. "There is no  state in Libya, through it to Africa and to all the other countries  of the African continent, first of all, the Sahara-Sahel region is  sending huge amounts of smuggled weapons, and in the other direction  from Africa and the Middle East to the north, to Europe, through  Libya is moving a wave of illegal migrants sweeping across the  continent, which is the result of the Libyan adventure. And the  result of the Arab adventure was just the creation of an Islamic  state, "concluded Lavrov.