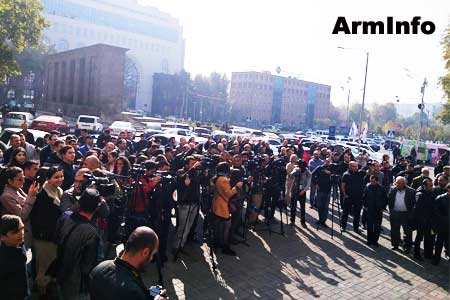 ArmInfo. Students of the  faculties of history and Armenian philology of Yerevan State  University again took to the streets of Yerevan, demanding the  resignation of the Minister of Education, Science, Culture and Sports  Araik Harutyunyan.Students again boycott classes and conduct a  procession.YSU linguistic students and a number of teachers held a  similar protest rally on November 6.

At the same time, a protest  rally with the same demand was organized by activists of the youth  wing of the Dashnaktsutsiun party.Araik Harutyunyan called the  actions of the protesters politically motivated.Explaining the motive  for the mass protest, the students said that Araik Harutyunyan's  decision to make the study of subjects - the Armenian language,  literature and history of Armenia selective for non- core faculties  in universities is unacceptable to them.

One student noted that the problem is not at all that they are future  teachers of these subjects, but that the state of Armenian culture is  "catastrophic".According to the ministerial initiative, the Armenian  language, literature and history of Armenia will not be included in  the list of compulsory disciplines in the curriculum of universities.  The ministry explained that according to the working draft law "On  Higher Education and Science", each university has the right to  decide independently whether it is necessary to include Armenian  discipline in the curriculum of non-core faculties. Thus, the bill  not only does not diminish the role of the Armenian language, but, on  the contrary, consolidates the dissemination of these important  values and the training of relevant specialists.