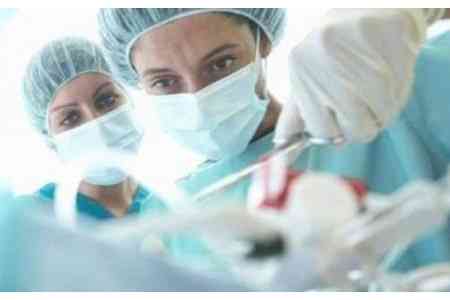 ArmInfo. On November 8, a new European Center for Nuclear Medicine opened in Yerevan in theErebouni Medical Center  where diagnostics of many oncological  diseases and treatment of thyroid cancer with radioactive iodine will  be available.  Prime Minister of Armenia Nikol Pashinyan attended the  opening ceremony of the Center.

As Executive Director of MC Erebuni Mikayel Manukyan noted in a  conversation with reporters, the new center meets all international  standards. 600 million drams were invested in the construction and  equipping of this center: the construction process itself required  serious investments. As a result, absolute safety of patients, staff  and the environment was ensured. "All the walls of the center are  covered with lead - during the construction they spent more than 70  tons of lead," he said. Moreover, according to him, treatment at the  Center will be quite affordable.

Isotopes used in the Center are imported from Europe. As Manukyan  noted, the center has an exclusive agreement with one of the largest  manufacturers of isotopes in Europe. However, it is possible that in  the future the Center will also use isotopes of Armenian production  if they appear and are of appropriate quality. And modern equipment  manufactured by the German SIEMENS company, used at the Center, will  detect not only thyroid cancer, but also cardiovascular and bone  problems.

The Executive Director of MC Erebuni did not rule out that in the  future the range of services of the center will be expanded and  modern methods of treating other types of cancer will be introduced.

As head of the Center, radiologist Natalia Shengeliya de Lange noted,  the Center is expected to receive about 400 patients with thyroid  cancer each year, but can take twice as much.