Pashinyan to protesters demanding resignation of Arayik Harutyunyan: There was no more national government in Armenia than ours 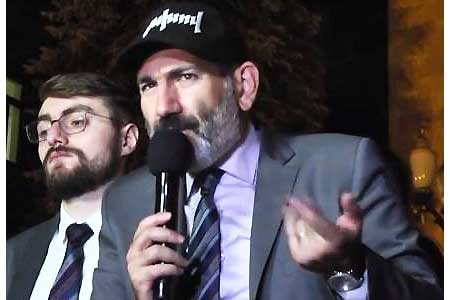 ArmInfo. "I do not share your assessment and do not agree with your views," Armenian Prime Minister Nikol Pashinyan said on November 8 to protesters at the building of  the Ministry of Education, Science, Culture and Sports, who stated  that the head of the MESCS Arayik Harutyunyan was inappropriately  expressed regarding the oldest party Armenia - ARF and does not want  to listen to the opinions of people who disagree with the policies of  the department headed by it.

According to the participant of the protest rally - a member of the  youth wing of the ARF, they believe that Arayik Harutyunyan failed  the education sector. "And if Arayik Harutyunyan stole money, took  bribes, taking entrance exams, would you not complain?" The prime  minister asked.

According to the head of the Cabinet, it's not Arayik Harutyunyan who  implements the state policy in the field of education, but the  government. As the prime minister pointed out, he does not agree that  certain groups take advantage of the situation, taking advantage of  the lack of information, thereby trying to put pressure on people's  national feelings. "There was no more national government in Armenia  than ours," Pashinyan said.

Representatives of the ARF-D Youth Union said that they were most  outraged by the financing from the state budget of the film "Mel"  dedicated to the transgender weightlifter named Mel Daluzyan (before  the sex change - Meline - ED note,). In response, Pashinyan noted  that the biographical film tells about the multiple champion of  Armenia, Europe and the bronze medalist of the World Cup, who  repeatedly raised the Armenian flag at non-international venues.

According to the Dashnaktsakan members, the ministry, meanwhile,  refuses to finance many really worthy films: "our people have many  heroes who can make good films about."