Lukashevich: Moscow is ready to help the parties to the Karabakh  conflict to develop a framework for a viable compromise 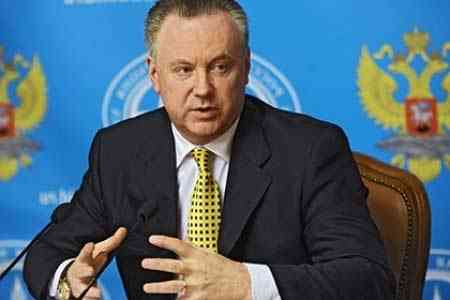 ArmInfo.The settlement of the Nagorno-Karabakh conflict is one of Russia's most important foreign policy priorities. During a speech at a meeting of the OSCE  Permanent Council Russian Permanent Representative to the   Organization Alexander Lukashevich said.

At the beginning of his speech, Lukashevich thanked the co-chairs of  the OSCE Minsk Group - Igor Popov, Stephane Visconti  and Andrew  Schofer, as well as the personal representative of the OSCE Chairman-  in-Office Andrzej Kasprzyk and Head of the OSCE High-Level Planning  Group Vladimir Minarik for the comprehensive information on the  development of the negotiation process and assessment current  situation in the region.

At the same time, he noted with satisfaction the preservation of  relative stability on the contact line and the border of Azerbaijan  and Armenia, and the low number of violations of the ceasefire.  According to Lukashevich, this is a sign of the parties' interest in  finding a compromise at the negotiating table. He also expressed the  belief that maintaining and strengthening the ceasefire will  contribute to the effectiveness of the mediation mission of the OSCE  Minsk Group co-chairs.

"We look forward to the practical implementation of the discussed  confidence-building measures between the parties. Mutual trips of  journalists and possible exchanges of held persons could greatly  contribute to the environment of trust necessary for progress in the  settlement. It is important that representatives of the parties at  all levels refrain from statements and unilateral steps, obviously  painful for negotiating partners.  This does not meet the task of  creating the conditions necessary for advancement in a political  settlement of the conflict, "- Russian diplomat stated.   He also expressed gratitude to Kasprzyk and his highly professional  team for their significant contribution to maintaining stability in  the region, encouraging contacts between representatives of the  parties, and implementing humanitarian initiatives.

"It is necessary to avoid obstacles to the monitoring of the  situation on the ground by the personal representative's office. It  is useful to return to the practical elaboration of an agreement  fundamentally agreed by Azerbaijan and Armenia on expanding the  OSCE's ability to monitor the situation on the Contact Line and on  the Azerbaijani-Armenian border. We appreciate the contribution of  the high-level planning group on updating peacekeeping plans in the  region within the framework of the mandate approved at the CSCE  summit in Budapest in 1994. In conclusion, we would like to confirm  that the settlement of the Nagorno-Karabakh conflict is one of  Russia's most important foreign policy priorities. We intend to  continue to jointly and in a coordinated manner with other members of  the "threesome" of co-chairs of the OSCE Minsk Group provide all the  necessary assistance to the parties in developing a mutually  acceptable basis for a viable compromise, "the Russian Permanent  Representative to the OSCE concluded.