Czech diplomat: CEPA is a good opportunity for developing cooperation  between Armenia and EU 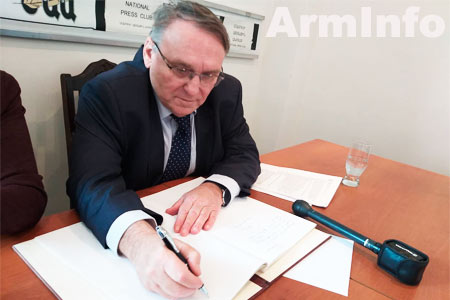 ArmInfo. Armenian-Czech relations are at a very good level and are growing. Newly appointed Ambassador of the Czech Republic to Armenia Bedrich Kopecky said this  on November 7 at a press conference in Yerevan.

At the same time, he emphasized that a high level of political  relations was recorded, a striking example of which is the last  meeting of the Prime Ministers of Armenia and the Czech Republic on  the sidelines of the UN General Assembly in New York, which was held  in a positive direction.

"At this meeting, the heads of government of our countries also noted  that there is a serious untapped potential in the trade and economic  sector, and this despite the permanent development of the economic  component of our relations," the diplomat said. In this context, he  informed that next year it is planned to hold the next meeting of the  Armenian-Czech intergovernmental commission in Yerevan, which will  outline new directions for cooperation.

Kopecky also recalled that the Czech Republic was one of the first,  to ratify the Armenia-EU Comprehensive and Enhanced Partnership  Agreement (CEPA), which was positively regarded in Armenia. "I think  that CEPA is a good opportunity for developing cooperation between  Armenia and the EU, as well as individual EU countries. The EU  Eastern Partnership program is also a good mechanism in this  direction," the diplomat said, adding that the Czech Republic was  from the first days of this initiative supported and facilitated the  processes of the Eastern Partnership. He also emphasized that in  Europe they would like to know what processes Armenia intends to  develop within the framework of the EaP program.

At the same time, the Czech diplomat stated that the EU supports the  ongoing reforms in Armenia, including in such areas as human rights,  justice, and the rule of law. In this regard, he noted that as far as  he knows, the Venice Commission is advising Armenia in this process.

Meanwhile, to clarify whether the visit of the Czech top leadership  to the RA is planned, the Ambassador noted that Prime Minister of  Armenia Nikol Pashinyan accepted the invitation of the Czech side to  visit Prague, and the visit is planned to be held in early 2020, and  it is difficult to prepare two visits of this level in one year .  However, he did not exclude the visit of Speaker of the Chechen  Parliament to Yerevan.