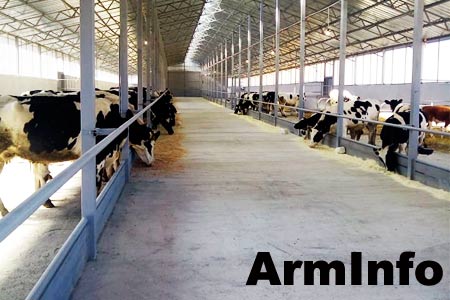 ArmInfo.In Armenia, about 1 thousand families within the framework of the poverty alleviation program will be able to engage in livestock and poultry farming at  the expense of state funds. The government at a meeting on November 7  approved a draft decision on ensuring sustainable income for people  receiving family benefits.

According to the Minister of Labor and Social Affairs of the Republic  of Armenia Zaruhi Batoyan, earlier, within the framework of various  programs, about 2.7 billion drams were saved, of which 615 million  drams will be used to solve the problem. In particular, 1 thousand  families will be provided at the expense of state funds with  livestock of cattle and small cattle, poultry, and livestock of pigs.  Future farmers will also receive feed, be provided with veterinarian  services and consultations. If the program succeeds, other  beneficiaries will be included. The ultimate goal of the project is  to provide socially vulnerable families with jobs and opportunities  for sustainable income. Educational activities aimed at improving the  literacy of the beneficiaries of the program are also foreseen.

The Minister noted that the development of the document took into  account the experience of the World Vision organization and the UN  FAO program, which carried out similar projects in Armenia, which  resulted in a 90% increase in the income of the beneficiaries of the  programs and a 55% reduction in poverty. Based on this experience the  government intends to implement a similar project.  In his turn, the  Prime Minister of the Republic of Armenia Nikol Pashinyan noted that  the issue of raising education should always be on the agenda of the  executive body, since having a diploma is not yet evidence of proper  education. Also, according to the head of government, it is important  to constantly monitor the effectiveness of the program and the  targeted use of the allocated funds. He recalled dozens of criminal  cases within the framework of the investigated corruption cases. The  saved 2.7 billion drams is not a saving, Nikol Pashinyan continued,  these are the same funds that were returned as a result of the steps  taken. <Previously, these funds were debited, and ended up in the  pockets of officials who are now wanted.  Our goal - send stolen  funds to solve the problems of the unemployed. At the same time,  there is no 100% confidence in the success of the project,  theoretically everything is possible. But even if this option doesn't  work, we will work on another, since our conceptual task is to create  opportunities for work, we have no other way, "the Prime Minister  emphasized.