Greece President: Athens supports Yerevan`s efforts to  internationally recognize the Genocide not for revenge, but to ensure  that such crime never happens again 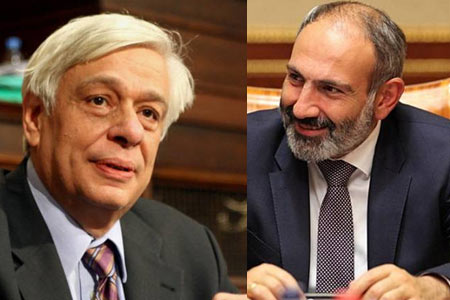 ArmInfo.The interstate ties between Armenia and Greece are at a very high level, and Yerevan hopes to establish productive economic cooperation on this favorable  ground.  This was stated by  Prime Minister of Armenia Nikol  Pashinyan on November 5 at a meeting with the President of Greece  Prokopis Pavlopoulos, who arrived in Armenia on an official visit.

According to Pashinyan, he with particular pleasure remembers the  meeting with Greece Prime Minister Kyriakos Mitsotakis in September  this year, at the UN headquarters. "We had the opportunity to discuss  bilateral relations and agree on upcoming plans with the Greece Prime  Minister," Pashinyan said, noting that a tripartite assembly is  expected to be held in Yerevan in January 2020 with the participation  of Cyprus.

As the head of the RA government pointed out, Armenia has a special  attitude towards Greece. "The Armenian people with particular  significance remember the fact that Greece recognized the Armenian  Genocide in the Ottoman Empire in 1996. At the same time, in 2015,  the Armenian parliament officially recognized and condemned the  Genocide of the Greeks and Assyrians in the Ottoman Empire. I think  this fact creates the basis for a joint search for cooperation on  global security, "he said.

Prokopis Pavlopoulos, in turn, noted that he appreciates and supports  the efforts of Armenia towards the international recognition of  genocides. "We are pleased that the House of Representatives of the  United States Congress recently adopted an overwhelming majority of  the resolution recognizing the Armenian Genocide," he said, stressing  that these efforts are supported by Greece not for revenge, but to  ensure that such crime never happens again.

To recall, in March 2015, the National Assembly (Parliament) of  Armenia unanimously voted for a resolution on the recognition and  condemnation of the Genocide of Greeks and Assyrians in Ottoman  Turkey. "Guided by resolution 96 (1) of the UN General Assembly of  December 11, 1946," UN Convention on the Prevention and Punishment of  the Crime of Genocide "of December 9, 1948," UN Convention on the  Non-Applicability of Statutory Limitations to War Crimes and Crimes  against Humanity "of 26 November 1968, as well as relevant principles  and provisions in all other international human rights acts, taking  into account the friendly relations of the Armenian, Greek and  Assyrian peoples, coming from the depths of centuries, the National  Assembly of Armenia declares that it condemns the Genocide of the  Greeks and Assyrians in Ottoman Turkey, "the resolution says. The  text of the resolution was prepared by representatives of all six  factions of the Armenian Parliament.

The Genocide of the Assyrian people was carried out by the Ottoman  Empire during the First World War.  According to various sources,  about 800 thousand Assyrians were killed.

Ethnic purges against the Greek population of Turkey were actively  carried out by Turkish nationalists and under the leadership of  Mustafa Kemal (Ataturk) during the Greek-Turkish war of 1919-1922. It  was May 19, 1919 - the day of the landing of Kemal in Samsun, when  the beginning of the second wave of massacre was marked, is  commemorated as the day of Genocide of the Pontic Greeks. The number  of victims of the Genocide of the Pontic Greeks, according to various  estimates, ranges from 350 thousand to 1.2 million people.