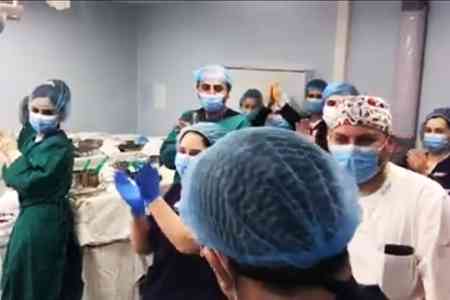 ArmInfo. In 2020, in terms of healthcare, it is planned to allocate 109 billion drams from the budget in Armenia, which is 1.5% of GDP (89.6 billion drams were  allocated in 2019). Taking into account the fact that in the summer  of this year the Government allocated an additional 12 billion drams  to the Ministry of Health, next year expenses for the health sector  will grow by 7.3%. This was announced on November 1 by the Minister  of Health of the Republic of Armenia Arsen Torosyan at the budget  hearings in the parliament.

Budgetary funds will be allocated, in particular, to primary health  care, maternal and child health care, medical care for socially  disadvantaged groups, the prevention of infectious diseases, and so  on.  So, 27.1 billion drams will be allocated for primary health  care. The Minister informed that next year a pilot program for  screening colorectal cancer among people aged 50-75 years will be  implemented in two medical centers of the country. 5.7 billion drams  will be used to protect public health, which is 26.2% more than this  year. In particular, it is planned to switch from a pentavalent  vaccine to a hexavalent one.  18.7% of the allocated funds, or AMD  20.4 billion, will be allocated to the program for protecting the  health of mothers and children (27.4% more than in 2019). Torosyan  said that for the first time it is planned to expand the list of  screening studies for pregnant women from the high-risk group. In  addition, funds will be used to expand the program approved this year  to provide certain population groups with the latest reproductive  technologies for the treatment of infertility.

27.1 billion drams will be allocated for medical services for  socially disadvantaged segments of the population and citizens  included in certain groups, which is 47% higher than the figures for  the current year. In particular, 100 million drams will be allocated  for kidney transplantation for people suffering from chronic renal  failure, and another 100 million drams - for bone marrow  transplantation for people with blood diseases.

13.7 billion drams will be allocated for the fight against  noncommunicable diseases (growth compared to 2019 amounted to 34.4%),  2.7 billion drams for the prevention of infectious diseases (growth -  6%), 4.3 billion drams for ambulance services ( growth amounted to 1  billion drams), 3.3 billion drams - for the drug supply program  (growth - 22.8%). Torosyan informed that next year it is planned to  introduce a program to provide drugs for people with hepatitis C.  With the assistance of the World Bank, medical centers will be built  in Vayots Dzor and Gegharkunik, as well as the technical equipment of  existing new medical centers.  In addition, the WB and the Eurasian  Fund for Stabilization and Development will support a screening  program for cervical cancer, diabetes, and hypertension. Torosyan  said that a program for screening for breast cancer will be  implemented in Lori, Tavush and Syunik.