Until early spring 2020, design estimates for the new Yerevan metro  station will be developed 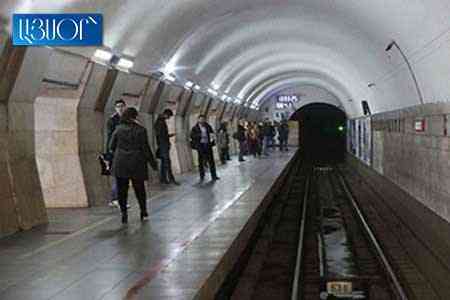 ArmInfo. As expected, before  the beginning of spring 2020, work will be completed on the  development of design estimates for the new Yerevan metro station.  This was announced on October 29 by the Deputy Mayor of Yerevan Hayk  Sargsyan in the parliament.

According to him, the investor is currently discussing a project to  build a station and a bridge across the Hrazdan River. An agreement  has been reached that the investor will finance all work on the  development of design estimates for this program. After that, based  on the price of the issue, construction will begin. Based on the  business model that the investor offers, a business center and a  shopping center will operate next to the future station. Recently, as  the deputy mayor noted, a group of metro builders at the investor's  invitation visited Yerevan, who conducted research both in the  Hrazdan Gorge and on the site of the future tunnel. It is planned, in  particular, that the new metro station will be located on the bridge,  above the Hrazdan Gorge, which will ensure the continuation of future  construction work in the tunnel and the construction of another  station. The Deputy Mayor found it difficult to name the volume of  investments, saying only that on average 1 km of the metro line  requires 1 million investments. However, in the case of the new  station, the amount may turn out to be much smaller, since a  significant amount of work has already been completed in previous  years.

To note, earlier the city authorities have repeatedly said that the  construction of a new station should be an investment project, and  not a credit program. Within the framework of this program, the  investor will build the station, having received in return an  opportunity for business activities in adjacent territories.  There  are sketches of a multifunctional complex on the territory of  Achapnyak district. Next to the new station, it is planned to erect  shopping and entertainment complexes and build residential buildings.   Yerevan metro named after Karen Demirchyan was founded in 1981. In  total, there are ten metro stations in Yerevan with a total length of  13.4 kilometers.