Minister: The draft state budget of Armenia for 2020 does not provide  funding for the planting program of 10 million trees 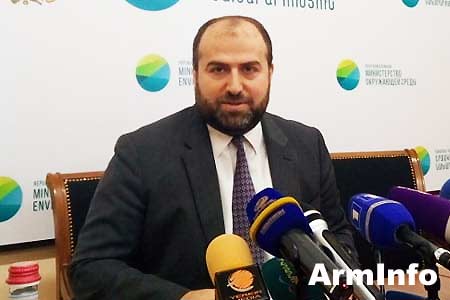 ArmInfo. The draft state  budget of Armenia for 2020 does not provide funding for the planting  of 10 million trees, which was announced on October 10 by Prime  Minister Nikol Pashinyan.

Minister of the Environment of Armenia Erik  Grigoryan announced this at the hearings on the next year's draft  state budget in the parliamentary commissions on October 29.  To  recall, on October 16, speaking at the Global Innovation Forum, the  Prime Minister announced the intention of the authorities to  implement the 10 million tree-planting program on October 10, 2020.   According to the head of government, the event is scheduled to be  held on the tenth day of the tenth month of 2020. This ambitious  project, as noted by the head of the government, aims to symbolize  the unity of 10 million Armenians from around the world.

In this regard, the Minister of the Environment of the Republic of  Armenia, Erik Grigoryan, noted today that in implementing this  program, the authorities intend to seek the help of both partner  countries, the local population and representatives of the Diaspora.  In particular, as the Minister noted, successful negotiations are  underway with Russia, Belarus and Kazakhstan on the implementation of  joint projects, including on this project. Eric Grigoryan emphasized  that the program is of a nationwide nature, and individual citizens,  as well as educational institutions and business structures, will  take part in it.

He also said that the draft state budget for 2020 will allocate 6.9  billion drams to the Ministry of Environment, of which 1.6 billion  drams will be a grant from KfW Bank. It is envisaged, in particular,  to implement five programs. The first program will deal with  environmental monitoring, which will be directed at 317 million  drams, the second program with a financing volume of 2.8 billion  drams will be aimed at maintaining the staff, offices for the  implementation of environmental programs and technical re- equipment.  Another 2.2 billion drams are planned to be allocated for the  restoration and maintenance of forests, and 400 million drams - for  the maintenance of the nature museum and zoological park. A slight  increase in the volume of budget financing by 117 million drams was  mainly due to the increase in salaries for medical staff, as well as  for the conservation and closing of artesian wells in the Ararat  Valley. As of today, 500 such wells have been closed. With the grant  funds of KfW Bank in the amount of 1.6 billion drams, it is planned  to implement two programs - to implement land restoration around a  closed stone deposit in Artik (680 million drams) and reduce the  social vulnerability of residents of the settlements around Dilijan  and Khosrov parks (1.1 billion drams).