The US warned Uzbekistan: Striving for EAEU could complicate WTO  accession 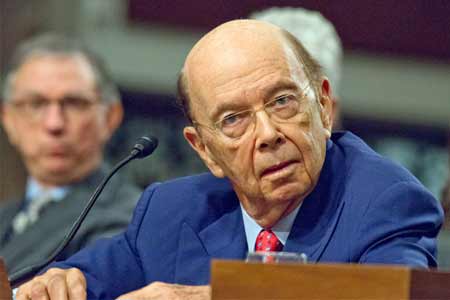 ArmInfo.Uzbekistan's desire to join the Eurasian Economic Union (EAEU) may complicate and extend the process of the country's accession to the World Trade  Organization. This was stated by US Secretary of Commerce Wilbur Ross  at the business forum of the American-Uzbek Chamber of Commerce in  Washington on October 22.

"The desire to join the Eurasian Economic Union can now complicate  and extend the process of joining the WTO beyond the time frame  established by the leadership of Uzbekistan," he said, urging Uzbek  partners to "carefully study the impact of new agreements on  accession to the WTO", Gazeta.uz reports.  The fact that Uzbekistan  is considering the issue of joining the EAEU was revealed during a  recent visit by the head of the Council of the Russian Federation,  Valentina Matvienko. President Shavkat Mirziyoyev spoke about the  prospects of membership in the union in the summer.

"The United States strongly supports Uzbekistan's entry into the WTO  and is awaiting the government's response to questions from the  memorandum on foreign trade regime," the head of the US trade  department said. The memorandum is the basis for considering the  application for the country's accession to the WTO, the draft  document was approved in March.

In his speech, Wilbur Ross welcomed the economic reforms in  Uzbekistan, namely, the liberalization of monetary policy and the  abolition of remaining currency restrictions, as well as the  establishment of relations with neighboring countries. "This makes  Uzbekistan an increasingly attractive market, as companies can very  easily serve the entire Central Asian region by working from  Uzbekistan," he said.

The minister called the positive results of the reforms a significant  increase in US trade with Uzbekistan:  from $ 136 million in 2017 to  $ 300 million in 2018. The volume of US exports to Uzbekistan in  January- August 2019 reached $ 455 million. "Uzbekistan has a real  chance to become the leading export destination for American goods in  Central Asia this year. However, much remains to be done to ensure  the sustainability of these reforms. It is important that Uzbekistan  not only establish, but also maintain a reputation for transparency  and the rule of law," said Ross.