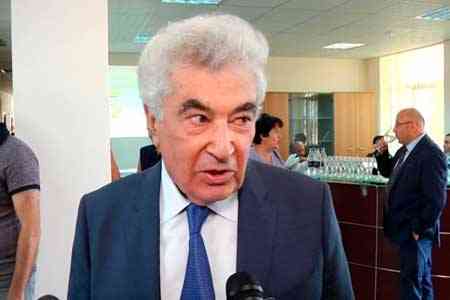 According to the RA Special Investigation Service (SIS), the goal was  for Tovmasyan to hold the position not for 6 years, but until he was  70 years old.

<There is no difficulty in understanding my resignation. I already  spoke about this, that on the 28th I was elected a member of the  Supreme Judicial Council and immediately decided that it is  inconvenient for the President of the Constitutional Court to be a  member of the council at another institute. I just simply resigned as  President of the Constitutional Court, which is my right, and no law  provides for a special procedure. That's my right. I could generally  announce on television that I had resigned, "Harutyunyan said.

To recall, the Special Investigative Service opened a criminal case  on the seizure of state power by a group of persons on the basis of a  statement by the independent MP of the National Assembly of Armenia  Arman Babajanyan. The case was brought under Article 300 of the RA  Criminal Code (seizure of power through violence or the threat of  violence, as well as the appropriation of the powers of the  president, Speaker of the National Assembly, government or the  Constitutional Court by methods not provided for by the  Constitution).

The statement of the MP concerns the legality of the chairmanship of  the head of the Constitutional Court of Armenia Hrayr Tovmasyan in  this position. The MP in his message to the Prosecutor General's  Office noted that Tovmasyan committed violations of the law upon  assuming this position in 2018. That is, Tovmasyan's MP duties were  terminated without a corresponding statement, on the basis of a  nonexistent justification by the then NA President. According to  Babajanyan, parliamentary duties cannot be terminated on non-existent  grounds.