Robert Kocharyan`s son: Detention of activists is lawlessness and the  application of double standards 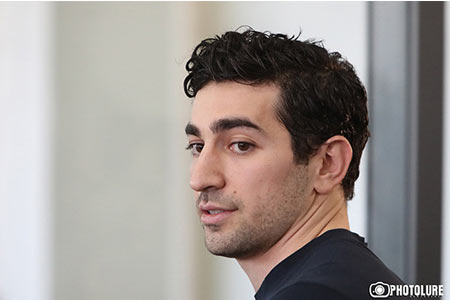 ArmInfo. There are 2 categories of judges in Armenia: those who make decisions that are "good" for the authorities and are allowed to take any illegal steps, and those who  disobey the authorities and their powers are suspended. This was  announced on October 21 by the son of Second President of Armenia  Robert Kocharyan, Levon Kocharyan, who joined the protest rally in  front of the Court of Appeal in support of Narek Mutafyan and Sarkis  Ohanjanyan demanding their release.

The Robert Kocharyan's son called the detention of activists  lawlessness and the application of double standards. <They are  arrested for political views. At least in this case we see double  standards. Talking about obstructing justice is absurd. What kind of  obstruction of justice can we talk about if people come up, ask a  question, everything is visible on the air, do not insult, but only  repeat the words of the Prime Minister. On the other hand, it does  not qualify as an obstruction of justice when, on September 16, the  judge was in the deliberation room and the next day he had to decide  to change the preventive measure against my father, based on the  decision of the Constitutional Court, and the first persons of the  state were the Prime Minister, NA President, they call the decision  of the Constitutional Court illegal.

It was illegal and obstruction of justice, or numerous other cases,  when the courts blocked after the release of my father>, Levon  Kocharyan noted.

It should be noted that today, October 21, the consideration of the  appeal against the decision of the first instance court on the arrest  of the supporter of Robert Kocharyan, Narek Mutafyan, was postponed.  It will continue at 14 hours on October 23.

Narek Mutafyan was arrested on September 29. The reason for the  arrest was an incident related to the trial of Robert Kocharian,  judge Anna Danibekyan. The judge walked along the street when a group  of young people approached her. Narek Mutafyan became interested in a  live broadcast whether Danibekyan ranks herself among the "whining  judges". In this case, Narek Mutafyan and Sarkis Ohanjanyan were  arrested.  They are accused of interfering with the activities of the  court in order to obstruct justice.