Riots in Barcelona create problems for tourists from Georgia and  Armenia 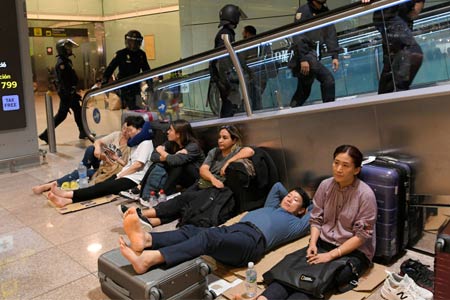 ArmInfo.About 40 tourists from Georgia and Armenia were unable to fly out of Barcelona Airport on time on October 20 after Georgian Airways canceled a flight due to unrest in the city, the Caucasian Knot online newspaper reported.

Protest rallies in Catalonia began after the Supreme Court of Spain  delivered a verdict against Catalan politicians who were involved in  organizing an independence referendum and were sentenced to  imprisonment of up to 13 years. During various demonstrations,  several hundred people were injured.  According to recent reports,  the damage from the actions of protesters in Barcelona exceeded 2.5  million euros.

The airline decided not to fly to Barcelona on the morning of October  20 due to the fact that the crew and passengers could not provide  security guarantees.

<The flight from Tbilisi to Barcelona was not carried out, and,  accordingly, the flight from Barcelona to Tbilisi was canceled>, the  Georgian Consulate General in Barcelona "Sputnik-Georgia" reports on  October 20.

Passengers claim that they learned about the cancellation of flights  only at the airport of Barcelona, reported "News of Georgia>. Most of  the passengers have already found the opportunity to fly out of  Barcelona. <Up to 10 people remain at the airport, including Armenian  citizens>, the publication reports the Consulate General.

The airline offered several options to the remaining passengers: wait  for the airline's flight on Wednesday and fly to Tbilisi on October  20, buy tickets to the city where Georgian Airways planes fly from,  or purchase another airline's ticket, and the airline will reimburse  its cost. Representatives of the Georgian airline in Barcelona  promised to buy a ticket for several passengers who do not have such   an opportunity.