Matteo Salvini: The Turkish regime has not changed its approach,  continuing to destroy ethnic minorities in its territory 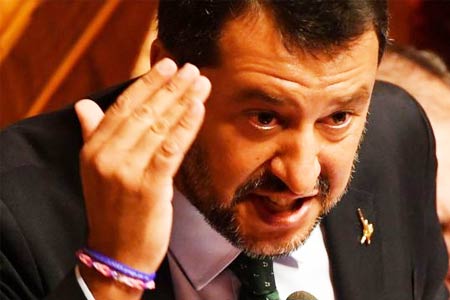 ArmInfo.The Italian "League of the North" held a mass protest against the new government in Rome. The rally, which was attended by tens of thousands of people, the  party leader, former Deputy Prime Minister Matteo Salvini, calls an  important act in the struggle for the return of power.

According to Euronews, in his speech he raised a whole range of  problems, including the Turkish operation in Syria. "The Turkish  regime has not changed its approach, continuing to destroy the  national minorities that live on its territory: first, Christians,  then Armenians, and then Kurds. But not by my name. This is not a war  in the name of the Italian people ... And this is still considered  dangerous to us and cruel! " - said Salvinia.

As part of the struggle with the former allies, the 5-star movement,  Salvini petitioned Mayor of Rome Virginia Raja - he promised to  collect a hundred thousand signatures for her resignation.