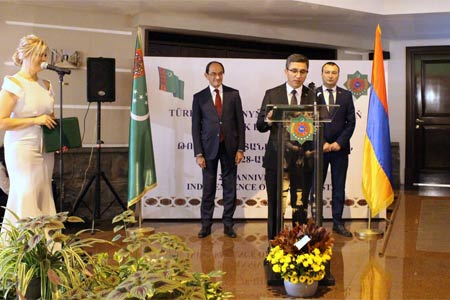 ArmInfo. On October 18, 2019 at the winter garden of the fashionable Grand Hotel Yerevan the Embassy of Turkmenistan in the Republic of Armenia an official  reception was held dedicated to the Independence Day of the Turkmen  state.

On this occasion the Vice-speaker of the National Assembly of the  Republic of Armenia Vahe Enfiajyan and deputies, representatives of  government, various ministries and state institutions of the Armenia,  diplomats of the Ministry of Foreign Affairs of the Republic of  Armenia, heads and employees of diplomatic missions accredited in  Armenia, as well as businessmen, artists, scientists, representatives  of civil society, NGOs, representatives of mass media and students  have gathered to celebrate the significant holyday in a festive  atmosphere.

In his welcoming note the Ambassador of Turkmenistan to Armenia  M.Ayazov emphasized that 28 years ago with the declaration of  Independence the foundation of a democratic, legal and secular state  had been laid, and that independence demonstrated the unity and  solidarity, high dignity, patriotism, peacefulness and friendly  attitude of the Turkmen people to the whole world. In Turkmenistan  under the wise leadership of the Leader of the Nation the motto "The  State for the man" is being implemented and an immense work is being  done in all spheres of Neutral Turkmenistan in this direction, the  main goal of which is the peace, harmony and prosperity throughout  the world and in every household. The Ambassador emphasized that  relations based on the principles of good neighborliness, humanism,  peacefulness and friendship with other states are brought to a  qualitatively new level, and particularly marked the Turkmen-Armenian  relations. It was emphasized that at present the two sovereign states  are successfully cooperating not only in the bilateral format, but  also within the framework of international structures, and the  evidence of which is the mutual support of international initiatives  and proposals put forward within the framework of authoritative  international organizations.

Warmly congratulating the guests of the official reception, the  Deputy Minister of Foreign Affairs of the Republic of Armenia  Mr.Shavarsh Kocharyan marked, that Turkmenistan is an important  partner for Armenia with whom Armenia have strong historical ties. As  to Mr. Kocharyan, there exists a high level political dialogue  between the two countries, which must be continuously strengthened  and used in several directions. He also stressed, that the  development of trade and economic ties is of great importance in the  multilateral agenda of Armenia and Turkmenistan, and it is necessary  to constantly search for new ways to enlarge economic cooperation and  realize the full potential in this sphere. According to the Armenian  top level diplomat our countries are also developing effective  cooperation in the fields of culture, science and education. In the  end of his speech, Deputy Minister Kocharyan expressed his  hopefulness that the Armenian-Turkmen cooperation, based on mutual  trust, respect and friendship between the people of two countries,  will continue to develop and strengthen. Guests of the official  reception were treated by national dishes from the Turkmen  dastarkhan.