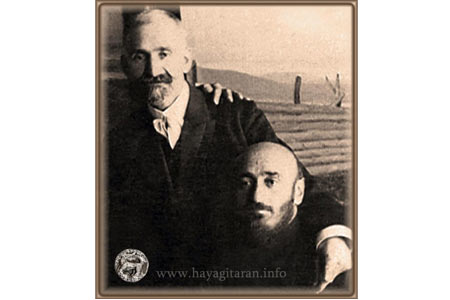 The Armenian delegation headed by RA Minister of Education, Science,  Culture and Sports Arayik Harutyunyan left for Paris to participate  in these events.

A concert of sacred music will be held in connection with the State  Chamber Choir of Armenia in the Paris Saint John the Baptist Church  (Surb Hovhannes Mkrtich, Ed. note)  in connection with the  anniversary of Vardapet.  It should be noted that on the eve of the  150th anniversary of Hovhannes Tumanyan and Komitas, the application  of Armenia for inclusion in the list of "Anniversaries of famous  people and important events" marked on the UNESCO calendar was  approved at the 39th session of UNESCO General Conference.  Thus, the  application entitled <150th anniversary of the composer,  ethnomusicologist, folklorist, singer Soghomon Soghomonyan - Vardapet  Komitas (1869 - 1935)>, submitted with the assistance of France and  Germany, and the application <150th anniversary of the poet, writer,  translator Hovhannes Tumanyan (1869-1923), presented with the  assistance of Georgia and Russia are included in the calendar  <Anniversaries of famous people and important events> UNESCO