The administrative court allowed Lydian Armenia to work, having  satisfied the lawsuit against the Department of Nature Protection and  Subsoil Use 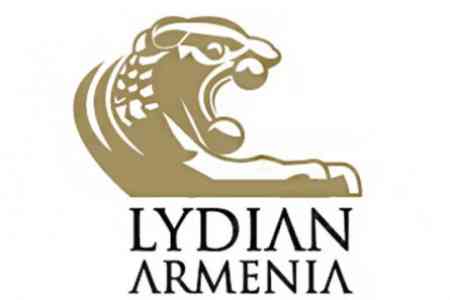 ArmInfo. The administrative court upheld the  Lydian Armenia lawsuit by the decision of the 2018 Department of  Nature Protection and Subsoil Use of Armenia. The court notes that  the previous actions of official Arthur Grigoryan, the former head of  the environmental and soil inspection against the Amulsar project,  are unlawful and cast doubt on his impartiality.

The court  invalidated the decision of the Department of Nature Protection and  Subsoil Use of Armenia, adopted in 2018, which de jure suspended work  on the project. It is reported by Lydian International Limited.

In fact, the Administrative Court of Armenia concluded that the  alleged environmental circumstances were not justified as a result of  an independent examination. The court also noted that Arthur  Grigoryan actively opposed the Amulsar program before taking up the  post of head of the inspection, which could raise reasonable doubts  about his impartiality. The court considers that in this case Arthur  Grigoryan should not have participated in this work, which he did not  do. The court upheld decision 30-A of August 27, 2007 on granting the  company a license to develop the field.

Acting President and Chief Executive Officer Lydian Edward Sellers  said in this connection: "We were confident that the court would  establish that the allegations made by the former head of the  inspection were unfounded and that the decision was unlawful. This  court decision confirms that illegal attempts were made to intervene  in Lidian's full right to carry out and operate the Amulsar project.  It is regrettable that the illegal actions were actually committed  with the participation of an official of the Government of the  Republic of Armenia>. <In August 19, 2009, Prime Minister Nikol  Pashinyan publicly stated that the Armenian government had no legal  grounds to ban the construction of the Amulsar mine, and that it was  in the interests of the state to allow Lidian to further implement  the program. The prime minister also called on law enforcement to  unblock the roads and restore access for the company's employees to  the field. Then the Prime Minister repeatedly made such statements,  including during his visit to New York to participate in the UN  General Assembly. But to this day, illegal roadblocks impede this  opportunity>, the company said. The Prime Minister has also publicly  stated several times that "competing mining companies" and others  support the illegal blockade. Now it turns out that at least one of  these supporters was even a member of the Armenian government.

In fact, the Armenian government allowed the continuation of the  illegal blockade of the Amulsar project from June 2018 and is not  able to comply with court decisions confirming the right of Lidian to  begin work on Amulsar.

In a statement, the company asks when the prime minister revealed the  names of those who block the work of companies and when will he take  steps to restore the rule of law? "

Meanwhile, we note that on October 17, Minister of Environment of  Armenia Eric Grigoryan spoke with reporters about the need for a new  Environmental and Social Impact Assessment (ESIA) of the Amulsar gold  mine exploitation program. As the Minister noted, there are many  facts that need additional verification, or at least clarifications  in the framework of the criminal case being investigated by the  Investigative Committee. As Grigoryan pointed out, despite the fact  that on August 19 the head of the Investigative Committee, after  submitting the expert opinion on the Amulsar project, said that at  present there were grounds for ending the criminal case instituted  under Art. 282 of the Criminal Code of the Republic of Armenia  (Concealment or willful misrepresentation of information on  environmental pollution), the case was not dismissed.

Lydian Armenia is a subsidiary of the British offshore company Lydian  International, whose shares are listed on the Tonon Stock Exchange.  The total cost of the Amulsar project is $ 370 million. The field's  life is 10 years and 4 months, with an average of 200 thousand ounces  of gold being mined annually.  Amulsar field is the second largest  reserves in Armenia. According to the company, the deposit contains  about 73733 kg of gold with an average grade of 0.78 g per ton, and  294.367 tons of silver with an average grade of 9.29 g per ton. It is  located in the south-east of the country, 13 km from the resort town  of Jermuk, between the rivers Arpa and Vorotan. Environmentalists and  ordinary citizens are concerned that the operation of the mine could  lead to the pollution of the mineral underground waters of Jermuk and  Lake Sevan.

ArmInfo. The problem of  developing the Amulsar field is politicized. This was stated by the  leader of the rock band System of a Down Serj Tankian at a press  conference in Yerevan on October 9.

Working group will be set up under the Public Council to study the  development of the Amulsar mine
Saturday, October 5 2019 16:47

ArmInfo. A working group with  the participation of experts will be set up at the Public Council of  Armenia to study the development of the Amulsar mine. Based on the  analysis of facts and the results of relevant studies submitted by  all interested parties, the position of the Public Council regarding  the development of the mine will be formed.

ArmInfo. 19 residents of  Jermuk appealed to the court with a request to invalidate the  Environmental Impact Assessment (EIA) for the Amulsar project.

Nikol Pashinyan on Amulsar program: We need to use our resources for  Armenia`s full development
Wednesday, September 25 2019 17:53

ArmInfo. Armenian Prime  Minister Nikol Pashinyan considers it improper to demonize the mining  industry. He stated this at a meeting with representatives of the  Armenian community of New York, answering the question why the new  government does not consider revising the legislation in this area so  as not to face possible blackmail of mining investors in the future.

Nikol Pashinyan in Los Angeles: At the moment, there is no de jure  reason to prohibit the exploitation of the Amulsar field
Monday, September 23 2019 11:01

ArmInfo. Armenian Prime Minister Nikol Pashinyan is concerned about orthodoxy in Amulsar's issue. He said this the day before, September 22, during a press  conference in Los Angeles.

ArmInfo. Residents of the city of Jermuk and the village of Gndevaz from the early morning of September 20 have been holding protests against the exploitation of  the Amulsar gold mine. Opponents of mine exploitation have been  declared strikes in schools in the region, and it is planned to  organize protests in Yerevan.

ArmInfo. In search of truth in  the Amulsar gold mine, the Armenian government intends to go all the  way. Prime Minister of Armenia Nikol Pashinyanl stated this at a  press conference on September 16, answering the question of whether  he thinks that 400 thousand dollars (this is exactly what the  taxpayer cost the expertise - Ed. note) were wasted.