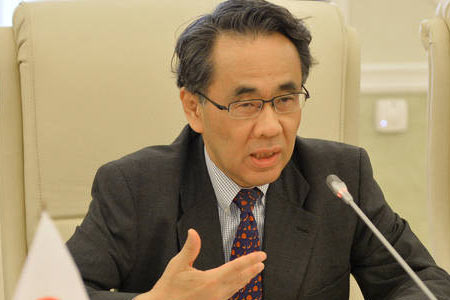 ArmInfo.The Japanese government is interested in strengthening relations with Armenia and is ready to discuss prospects for further development of bilateral  cooperation. This was announced during a meeting with the Prime  Minister of the Republic of Armenia, Nikol Pashinyan, by the Special  Advisor to the Prime Minister of Japan, Eiichi Hasegawa, who will be  in Armenia from October 16 to 18 as part of the Global Innovation  Forum.

According to the official press service of the government, Eiichi  Hasegawa conveyed good wishes from the Prime Minister of Japan to the  Armenian Prime Minister in connection with the reforms being  implemented in Armenia to develop democracy.

In turn, Pashinyan noted that Armenia attaches importance to the  political dialogue with Japan, relations with which have been  developing dynamically since the establishment of diplomatic  relations, and the effective cooperation formed on its basis has  growth potential. The Head of Government expressed gratitude for the  assistance provided to Armenia by the Japan International Cooperation  Agency (JICA), and noted that the joint programs being implemented  contribute to the development of Armenian-Japanese relations in  various fields.

The Prime Minister confirmed the invitation to Japanese Prime  Minister Shinzo Abe to visit Armenia, noting that he would be glad to  accept a colleague and discuss the prospects for effective Armenian-  Japanese cooperation.

According to the source, during the meeting the interlocutors  exchanged views on the progress of infrastructure development  programs in a number of areas, prospects for strengthening ties in  education, tourism, and the humanitarian sphere.  It should be noted  that, according to the RA Statistical Committee, the trade turnover  between Armenia and Japan in January-August 2019 increased by 40.9%  to $ 94.7mln. In particular, exports showed 2.1-fold growth,  amounting to only $ 612.5 thousand, while import increased by 40.6%  to $ 94.1 million.