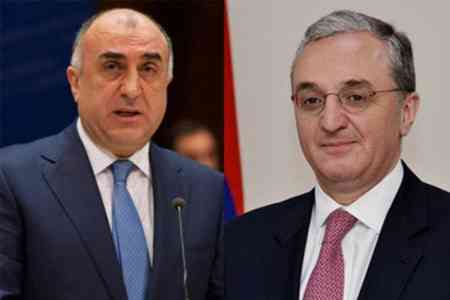 So, in the Izvestia newspaper, to the question whether there is any  benefit from meetings at the level of the Foreign Ministers of  Armenia and Azerbaijan, which have already taken place this year 7,  and can we say that there have been some progress in resolving the  conflict, Mamedyarov, in particular, he said: "While we are only  waiting for the results. The last time we met in the United States a  month ago.

I have already said that, unfortunately, we should not talk about  negotiations, but about a meeting.  Although the last such meeting  with my Armenian counterpart was in New York with the participation  of the Minsk Group, to be honest, I am a little disappointed with it.  If we want to move forward and really want a political solution to  this dispute, then, of course, we need to start what is called my  favorite word "substantive negotiations" - so that there is some  substance, on the basis of which the conversation goes.  Yes, we were  negotiating, but the Minsk co-chairs at one point said: but, you see,  military operations on the line of contact ... But, for the sake of  objectivity, over the past years - by the way, how much already?  "they started in Prague, then it resulted in a Madrid document -  throughout all times the contact line has been quite hot," the  Azerbaijani minister said, adding that they could still solve  problems, move forward and conduct fairly serious, article-by-article  negotiations how to solve current issues - first of all, to arrange  for the military to return back to their barracks, and the people  expelled from their places of permanent residence to return home.

According to him, only after that all other issues could be resolved.  Mammadyarov also stated that everything that was laid down in the  Madrid document in 2008, then in its revised version for 2010, then  in the Kazan document - all this is being processed, processed, but  in principle it remains the basis for negotiations. "And we always  tell our co-chairs: we will not go anywhere, we must sit and  substantively negotiate with Yerevan on a document that is on the  table today," the Azerbaijani chief diplomat concluded.