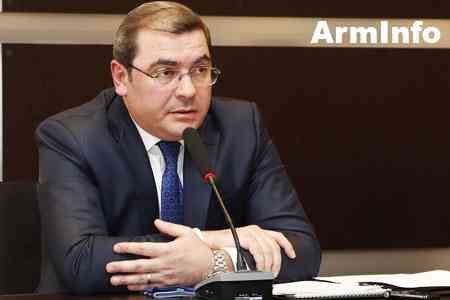 ArmInfo. Based on the results of a study of the declared volumes of retail trade turnover in Gyumri for September 20-22, head of the tax administration of the Shirak region was dismissed.  Head of the State Revenue Committee (SRC) of  Armenia David Ananyan reported to journalists on October 16.

According to Ananyan, many managed to ascertain the fact that in the  period from September 20 to 22 in connection with the celebration of  Independence Day in Gyumri, the city was visited by an unprecedented  number of tourists - about 15 thousand people. On behalf of the Prime  Minister, the tax authorities examined how much this dynamic has  affected the business. "When comparing the recorded turnover of  business entities for three weekends - September 6-9, September  13-15, September 20-22, it turned out that if in the fields of food  service, gas station activity, trade, for September 6-9, 112 thousand  cash-register receipts were printed and the turnover in the amount of  381 million drams was declared, for September 13- 15, 118 thousand  cash-register receipts with a turnover of 339 million drams were  printed, for September 20-22, 115 thousand cash-register receipts and  a total of 403 million drams were declared. This indicates both the  omissions of the regional SRC and the fact that tax agents in the  person of business entities have not yet formed a culture of  providing cash receipts, "the chief tax official said.

At the same time, as David Ananyan emphasized, the SRC itself  recognized that there were omissions and imperfections noted during  the work of the department. Immediately after this, the head of the  Shirak administration of the SRC lost his post, because the Committee  considered that he also had his share of guilt.

Earlier, on October 9,  Prime Minister of Armenia Nikol Pashinyan on  the sidelines of the scientific- practical symposium ''What to do?  Economic revolution - understanding and implementation'' stated that  despite the fact that on September 21 in Gyumri the restaurants were  full, there was a large crowd of guests and unprecedented economic  activity, it turned out that trading cash-register receipts were  printed at the same amount as previous days. According to him, this  is actually very bad news. "That's what we mean, speaking of business  partnerships and the state. The business sector in Gyumri knew that  on this day the tax inspectorate would not conduct checks and raids.  The government took such measures to create new opportunities for  local business by organizing such a grand event. Should a business  take retaliatory steps?  And here the logic of partnerships is  important - the economic revolution cannot be a monologue. It should  be a dialogue, "the prime minister said.