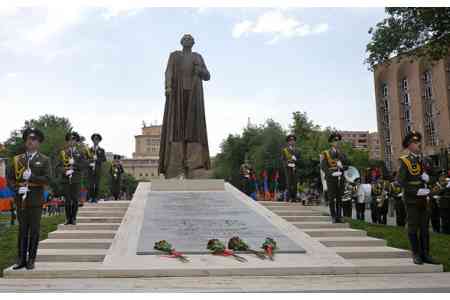 ArmInfo.Knowledge of history is not the strongest side of Azerbaijani President Ilham  Aliyev. Official representative of the Armenian Foreign Ministry Anna  Naghdalyan announced this on October 14 during a briefing in Yerevan.

Thus, commenting on Aliyev's statement on the "glorification of  fascism" in the form of the installation of a monument to Garegin  Nzhdeh in Yerevan, the Foreign Ministry spokeswoman in particular  noted: "At one of the previous briefings, I already said that 600  thousand Armenians fought Nazism in the Great Patriotic War. 300  thousand died. The Armenian people gave 150 Heroes, 80 generals, 6  marshals. All these figures indicate the contribution of the Armenian  people to the common struggle. And this is what we are proud of. But  we also fought for existence and independence against the Turks and  Caucasian Tatars, and we respect our heroes."

At the same time, she emphasized that Armenia is committed to the  struggle against neo-Nazism and xenophobia, any manifestation of  radicalism, as it knows firsthand what consequences these phenomena  are fraught with.

"Regarding Ilham Aliyev's reproaches for revising history- history is  not his strongest point at all. In response, I want to urge revising  the policy of heroizing criminals like Ramil Safarova, who savagely  murdered an Armenian officer in Budapest, and was sentenced to life  imprisonment, but was released to freedom and heroized by Aliyev, "  Naghdalyan summed up.