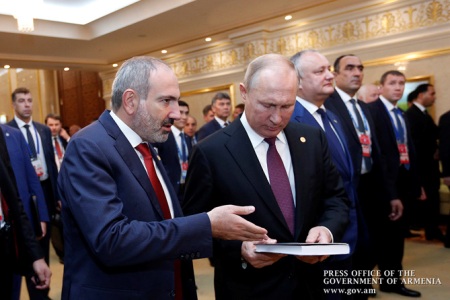 ArmInfo. On the sidelines of the meeting of the heads of state of the Commonwealth of Independent States in Ashgabat, Prime Minister of Armenia Nikol Pashinyan gifted  President of the Russian Federation Vladimir Putin,  former Russian  co-chair of the OSCE Minsk Group Vladimir Kazimirov's  "Peace to  Karabakh" book . From the capital of Turkmenistan the special ArmInfo  correspondent reports.

From 1992 to 1996, Vladimir Kazimirov was co-chair of the OSCE Minsk  Group. He made a significant contribution to the negotiation process  to resolve the conflict.