Vahram Petrosyan: the existence of Kurdish territory uncontrolled by  Damascus on the border with Turkey, Ankara poses numerous risks 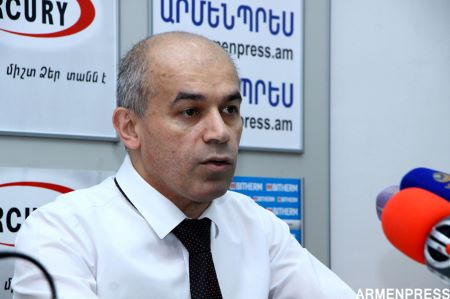 ArmInfo.Turkey, as a rule, looks at all the issues that occur in the region through the prism of the Kurdish question. Vahram Petrosyan, head of YSU Department of  International Relations and Diplomacy, head of the Division of  Armenian-Kurdish relations announced on October 11 at a press  conference

He noted that naturally this step of Ankara was thought out and  calculated. "Turkey noted and recorded two signals, after which it  began to carry out this invasion of Syria. The first signal for them  was the fact that the United States announced the withdrawal of its  troops from Syria. And it is not even a matter of whether or not the  States withdrew the troops from Syria; the main thing is a kind of  message for both Turkey and the Kurds, which was understood by  Ankara, "the expert emphasized.

The second factor that unleashed the hands of Turkey, the expert  considers the statement of the leadership of Russia. "A few days ago,  though in a completely different context, the Russian leadership  stated that Turkey has the right to take care of its security. This  was also perceived by Ankara as a "signal" for the implementation of  its plans," Petrosyan emphasized.

He also said that the purpose of the Ankara operation is precisely  the Syrian Kurds. "Despite the statement by the Turkish authorities  that they intend to create a security zone, in fact, their target is  the Syrian Kurds.  In particular, the official Ankara with the  deepest hatred of the Kurdish national movement, both in Turkey and  abroad Consequently, the existence of Kurdish territory uncontrolled  by Damascus on the border with Turkey is associated with numerous  risks in Ankara. Any achievement of the Kurds in the Turkey region is  considered as a threat, therefore their aim is to striking Kurdish  formations, " the head of YSU Department of International Relations  and Diplomacy said

Petrosyan noted that Kurdish autonomy and, moreover, an independent  Kurdish state in Syria from the point of view of Ankara is a bad  example for Turkish Kurds, who periodically require autonomy from  Turkey. At the same time, according to the expert, the Turkish  leadership does not understand one thing - no matter how much they  try to weaken the Kurdish movements outside Turkey, their internal  problem will not disappear from this and will not go anywhere.   Petrosyan also considered groundless the fears that Turkey might try  to repeat the same operation in Armenia. "Turkey will not conduct  such an operation in our country on the basis of two factors,  firstly, Armenia is a member of the CSTO. And secondly, Russia is a  strategic partner of Armenia, and not only will not encourage such an  operation, and if necessary, it will help the Republic of Armenia to  repulse aggression. So, I think, in this context, drawing parallels  is inappropriate, "Vahram Petrosyan concluded.  To note, on October  9, Turkey launched a military operation in northern Syria under the  name "Source of Peace." The Turkish government noted that the purpose  of hostilities is to create a 32-kilometer security zone on Syrian  territory, along its border, to push out the Kurds who controlled it  until now and resettle about 2 million Syrian refugees who are still  in Turkey.