Vladimir Zharikhin:  Ukrainian "crisis spot" hindering the  realization of the dream of a single European space serves the  interests of United States 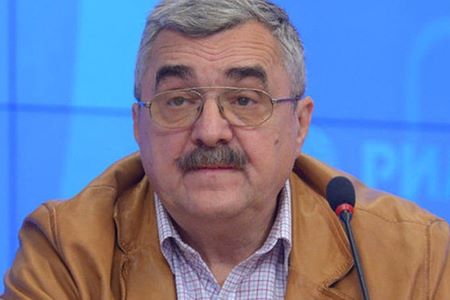 ArmInfo.  The leadership of  Ukraine wants through external pressure to win the war, which it lost in real action. This was stated by Deputy Director of the Institute  of CIS Countries Vladimir Zharikhin at a press conference in Yerevan  on October 11, commenting on the recent statement by Ukrainian  President Volodymyr Zelensky about Kiev's intentions and readiness to  return Crimea and Donbass.

"Volodymyr Zelensky disappointed me with his speech. Generally  speaking, both under former president Petro Poroshenko and under  Zelensky, the possible prospect of solving the existing problem is  considered either through more powerful Western pressure on Russia  and new sanctions, or through a change in the Russian leadership>,  remarked Zharikhin.

<If we imagine Ukraine, which by some miracle fulfilled the Minsk  agreements, it would rather be Ukraine, not Poroshnko or Zelensky,  but Kuchma's Ukraine in the late 1990s. That is, it would be a state  that is friends with both Russia and the EU, and with the presence of  conditional Lviv and conditional Donetsk within Ukraine, it will not  join the EAEU or NATO. Such a country should have been born if the  Minsk agreements were implemented, which would be in the interests of  both Russia (although Russia would like Ukraine to be part of our  economic space) and the countries of Western Europe>, the expert  noted.

Meanwhile, as noted, the interests of the United States have arisen  in this matter, which want a middle point in Europe to be a crisis  spot, which impedes the realization of the dream of a single European  space from Lisbon to Vladivostok. Zharikhin noted that a single  European space would be beneficial for Russia, including from the  point of view of accumulation of financial, intellectual and natural  resources with existing traffic flows.

Addressing the Ukrainian side, Zharikhin cited the example of Russia  and Chechnya, noting that for the sake of the integrity of the state  it is sometimes necessary to make extremely serious and painful  compromises. Meanwhile, according to the expert, the Ukrainian  authorities do not want to meet with the leadership of Donetsk and  Lugansk regions. At the same time, according to him, a similar  situation has developed in Georgia. "Georgia, in fact, is a federal  republic, but does not want to admit it>," he said.