Pashinyan replied  to  Aliyev for Nzhdeh 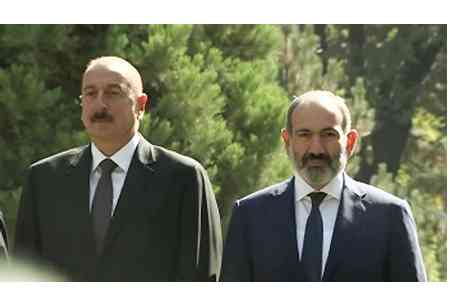 ArmInfo. The meeting of the Council of CIS Heads of State, which is being held on October 11 in Ashgabat, was initiated by a speech by President of Azerbaijan Ilham  Aliyev. The Azerbaijani leader chose the heroization of fascism in  the CIS space as the main topic, referring to Armenia in this  context, in particular, repeatedly mentioning Garegin Nzhdeh in his  speech, accusing him of serving the fascist regime.

According to the rules of the meeting, following Aliyev, the word was  taken by the Prime Minister of Armenia Nikol Pashinyan.

The head of the RA government first of all emphasized that the  representatives of the Armenian people not only fought in the ranks  of the Soviet army, but also took an active part in the resistance  movement in the countries occupied by fascists. In this regard, he  noted that one of the leaders of the French resistance was the  Armenian Misak Manushyan.

At the same time, Nikol Pashinyan noted that in Armenia there is a  special attitude to veterans. In this context, the Prime Minister  recalled the decision of the RA Government to double the social  allowance to all veterans of the Second World War. , he stressed.  To Aliyev's  statements, the RA Prime Minister retorted that Armenia supports any  constructive steps aimed at objectively sanctifying the historical  events of those years and opposes attempts to interpret them  subjectively. .

From the speech of the President of Azerbaijan, one gets the feeling  that Hitler had only a secondary role in the Great Patriotic War and  Garegin Nzhdeh was the leader of the Nazi movement, "Pashinyan said.  He continued, emphasizing that Garegin Nzhdeh fought against the  Turkish occupation of Armenia, against the Armenian Genocide, which  was organized by the Turks. Garegin Nzhdeh, as the prime minister  noted, in 1918 led many very important sectors of the front with many  Russian officers during the Armenian-Turkish war. "Once again, I want  to emphasize that it is really important that we give an objective  assessment of historical events," he said.

Responding to Aliyev's remark that Nzhdeh died in the Vladimir  prison, the Armenian prime minister noted that a lot of Soviet  leaders died in the Vladimir prison. In this context, Pashinyan in  particular referred to Alexander Solzhenitsyn, who was in the Gulag.  , he said.  The Prime Minister  also emphasized that he considers it inappropriate to use this format  of the meeting to distort history in order to introduce some tension  into the atmosphere of such an important meeting as the summit of the  CIS heads of state.

Speaking about the declaration, which will be signed at the end of  the meeting, Nikol Pashinyan added: "I would like, in particular, to  highlight those paragraphs that emphasize the need for joint efforts  to resume a broad international dialogue aimed at strengthening  international security, contributing to the leveling of lines of  distrust, tension and confrontation. I think that during such summits  we should do everything possible so that the tension between our  peoples and countries does not increase, but on the contrary, we  would find ways to dialogue and compromise, to mutual trust and  respect>.

In conclusion, the Prime Minister of Armenia emphasized that the  words of Ilham Aliyev are disrespectful, first of all, in relation to  the Armenian people, as well as to the heads of state and peoples  that they represent here.  , he concluded.