Mammadyarov: Azerbaijan is a supporter of the settlement of the  Karabakh conflict in the shortest possible time 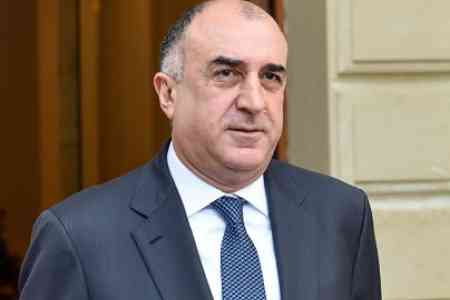 ArmInfo. "Azerbaijan is a supporter of the settlement of the Nagorno-Karabakh conflict in the shortest possible time," said Azerbaijani Foreign Minister Elmar  Mammadyarov during a speech at a meeting in a narrow composition of  the CIS Council of Foreign Ministers in Ashgabat.

According to Haqqin.az, the press service of the Azerbaijani Foreign  Ministry reports.

Elmar Mammadyarov noted that "negotiations cannot be held forever and  should not serve to continue and maintain the situation that arose as  a result of the use of force, occupation and ethnic cleansing".  The  Minister emphasized that unresolved conflicts in the CIS space pose a  serious threat to regional stability: ''In this regard, I want to  draw attention to the need for an early peaceful settlement of the  Nagorno-Karabakh conflict based on the norms and principles of  international law, the UN Charter, relevant resolutions of the UN  Security Council and the Helsinki Final Act''.