Hayk Konjoryan: Azerbaijani delegation to the OSCE PA tried to  present the Karabakh conflict as a territorial dispute, but again  received a corresponding answer 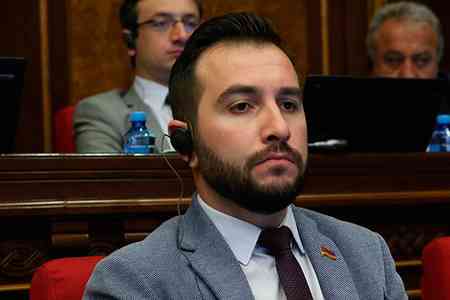 ArmInfo. Representatives of the Azerbaijani delegation make the same type and manipulative statements on all international parliamentary platforms. Hayk Konjoryan, the head of the Armenian delegation to the OSCE PA, MP from the My Step  bloc, said this at a press conference, summing up the work of the  Armenian delegation in the autumn session of the assembly.

He noted that the members of the Azerbaijani delegation to the OSCE  PA are constantly trying to advance their position on the Artsakh  conflict, however, they received a proportionate response.  "Unfortunately, many representatives of the Azerbaijani delegation  hold very high posts in the Assembly, which we cannot boast at the  moment, and it seems to us that this issue should be addressed in the  near future. So, the OSCE PA Deputy Chairperson, the head of the  Azerbaijani delegation, Azayem Guliyev, said that the Karabakh  conflict is an exclusively territorial dispute between Armenia and  Azerbaijan. Moreover, Guliyev also said that the Karabakh nation does  not exist, " Konjoryan said.

In response to this statement by Guliyev, the head of the Armenian  delegation was able to give a corresponding answer. "First of all, I  pointed out the high level of intolerance and hatred towards the  Armenian people that prevails in Azerbaijan today. And the people of  Artsakh will not be able to be part of Azerbaijan, under any  circumstances. As an example, in my speech I recalled an example  Ramil Safarov, who slaughtered a sleeping Armenian officer. Moreover,  everyone knows that democracy has not existed in Azerbaijan for a  long time, namely, the power in the country has not changed for  decades, which contradicts the freedom-loving and to the democratic  spirit of the people of Artsakh, "the MPnoted.

According to Konjoryan, he also touched upon the problems associated  with the observance of human rights in Azerbaijan. "I emphasized that  the Karabakh issue is not a territorial dispute and that the Karabakh  issue is deep, and it is connected with the right of the people to  self-determination," the head of the Armenian delegation emphasized.