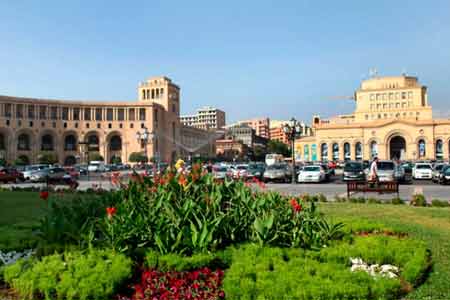 ArmInfo. This year, the metropolitan municipality decided to implement the new format of the Erebuni-Yerevan celebration. As deputy mayor Tigran Virabyan said at  a press conference on October 10, festive events will be held in all  administrative districts of the city on October 19.

Virabyan informed that the Municipality refused a traditional concert  on Republic Square, having "distributed" concert venues throughout  the capital. For example, jazz musicians are scheduled to perform in  Davtashen, and rock musicians in Nubarashen. In addition, a festive  event will be held at the Spendiarov National Academic Opera and  Ballet Theater, in which the honorary citizens of Yerevan, Yervand  Manaryan and Mikhail Piotrovsky, will be awarded.

In the evening, fireworks will be given simultaneously in all  administrative regions.

According to Virabyan, this year it is planned to allocate 190  million drams from the budget for the celebration of  "Erebuni-Yerevan". At the same time, according to him, for the first  time in 10 years, not one company, but several will be involved in  the organization of the festivities. All of them, as was noted, won  the corresponding tender.