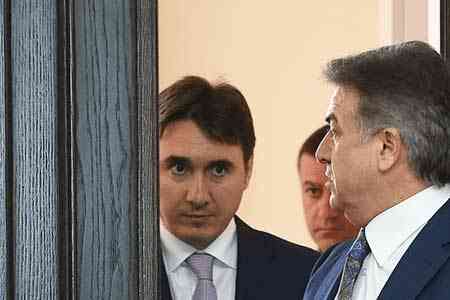 ArmInfo.. The defense of the former deputy prime minister, former secretary of the Security Council Armen Gevorgyan, who is involved in the case on March 1,  submitted a petition to the court to eliminate the measure of  restraint in respect of their client in the form of a recognizance  not to leave the country or to allow him to leave the country for a  week.

Thus, today during the trial, the lawyer Erik Aleksanyan asked the  Armenian court to either eliminate the ban on leaving the country or  allow his client to leave the territory of Armenia from October 26 to  November 4. As Aleksanyan told the court, his client needs to visit  Austria, where he must undergo a medical examination in connection  with heart problems, as well as hold a series of business meetings.   It should be noted that Armen Gevorgyan, who during the tenure of  former presidents of Armenia Robert Kocharian and Serzh Sargsyan held  high government posts, and during the events of March 1, 2008, was  the secretary of the National Security Council, is accused of  complicity in overthrowing the constitutional system, receiving  bribes on an especially large scale and money laundering.

On August 3, 2018, Armen Gevorgyan was charged with obstruction of  justice, and the case was combined with the case of <March 1>.  According to the statement of the head of the SIS, Sasun Khachatryan,  while appealing the results of the 2008 presidential election, Armen  Gevorgyan put pressure on the judge of the Constitutional Court to  decide in favor of the third president of Armenia Serzh Sargsyan. In  connection with this accusation, with respect to the former official,  a recognizance not to leave was chosen as a measure of restraint.

In December, three new charges were added to the charge of  obstructing justice brought against Gevorkyan in August.