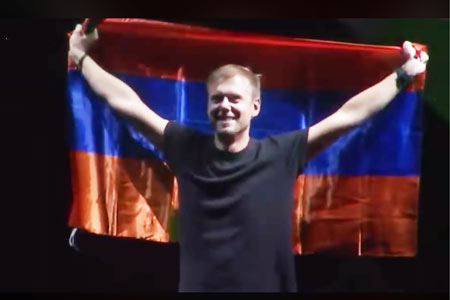 ArmInfo.The day before in Yerevan, the opening of the 23rd World Congress on Information Technologies (WCIT-2019) was marked by a grand open-air concert.

In the first part of the concert, a unique orchestra performed under  the direction of conductor Sergey Smbatyan, uniting over 100  musicians from 15 countries of the world. In addition to Armenia,  these were the states in which the Congress was previously held:  Canada, the Netherlands, Malaysia, the USA, Greece, Taipei, Spain,  Japan, France, Denmark, Mexico, Brazil, Australia, India.

As part of the performance, music created by artificial intelligence  (AI) was performed for the first time, and the national anthem of the  countries represented by the musicians of the orchestra formed the  basis of the written hymn WCIT-2019.

The second part of the concert was assigned to the Grammy Award  winner, the world famous Dutch DJ and music producer Armin Van  Buuren. During his enchanting performance, he actively communicated  with tens of thousands of spectators gathered on Republic Square. In  the final part of his show, Armin Van Buuren raised the Armenian flag  above his head, which caused great enthusiasm among fans of  electronic music. The concert ended with colorful fireworks.

WCIT 2019 will be held in Yerevan on October 6-9, 2019. The congress  is held by Armenia with the assistance and under the high patronage  of the RA government. The World Congress on Information Technology  (WCIT) was established by the World Alliance for Information  Technology and Services (WITSA). Its main organizational body is the  Union of Advanced Technology Enterprises (UATE).