RA Embassy in Georgia expresses condolences on passing away of a  great friend of Armenia, composer Giya Kancheli 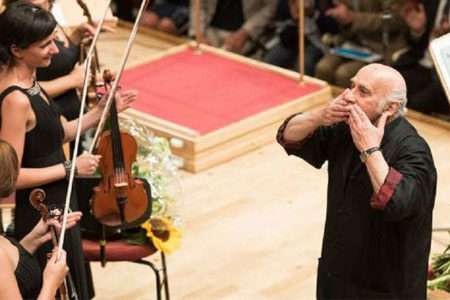 ArmInfo. The Armenian Embassy in Georgia expresses condolences to the Georgian people in connection with the death of the famous Georgian composer Giya Kancheli.

The Armenian Embassy also reminded that Kancheli lived for many years  in the House of Composers in Dilijan, where he wrote six of his  symphonies. He had many friends among well-known Armenian cultural  and art workers, was friends with the artist Mher Mkrtchyan  (Frunzik). Kancheli last visited Armenia in 2017 to participate in a  festival organized in his honor. Then he admitted that half of his  life was connected with Armenia.

World famous Georgian composer Giya Kancheli  has died at the age of  84 in Tbilisi. He was undergoing treatment in one of the Tbilisi  clinics. The composer became famous not only for operas and symphonic  works, but also for music for theatrical performances and films,  including "Extraordinary Exhibition", "Blue Mountains", "Mimino",  "Kin-dza-dza", "Do not Cry." He belongs to the music of the best  performances of the "Caucasian Chalk Circle", "Richard III",  "Hamlet", "Hanuma", "King Lear" and others. In an interview, Kancheli  said that "Do not Cry!" - the motto of his life. Giya Kancheli  was  born in Tbilisi in 1935, where he graduated from the conservatory.  From 1967 to 1986, he wrote seven symphonies; for the Fourth Symphony  in 1976, the composer received the USSR State Prize. Since 1991 he  has lived in Germany and Holland.