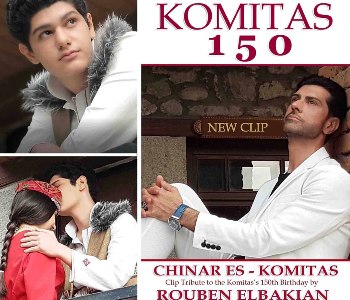 ArmInfo.The famous French  tenor of Armenian descent Ruben Elbakyan presented a video dedicated  to the 150th anniversary of Komitas.  The video in which Komitas's  work "Chinar es" sounds is already available on all social networks.  This is the third video by the performer, which is based on Komitas  music.

<This time I wanted to introduce our Great Komitas not as a mournful  song, but as a lyrical piece like "Chinar es". I wanted to recreate  the era in which Komitas lived, and the moment when he probably first  heard this work. I'm glad that my son played the main role in the  video'', the tenor said.  On November 29, Ruben Elbakyan will give  Ave Maria a large recital at the Madeleine Church in Paris, which  will mark the beginning of a major European tour. It is worth noting  that the tenor is also preparing for a solo concert in Armenia.

It should be noted that according to the authoritative edition  LUXURY, Ruben Elbakyan is included in the list of 57 most famous  Armenians of the world, along with Charles Aznavour, Henri Verno,  Michel Legrand, Cher, Kirk Kirkoryan and others. This is the only  Armenian performer, who was trusted three times to perform the French  anthem.  To watch the video, go to the following link:   https://www.youtube.com/watch?v=I1EpYNY4C3Q&feature=youtu.be