Arthur Vanetsyan answered Nikol Pashinyan: Time will tell who or what  will end up in the rubbish bin 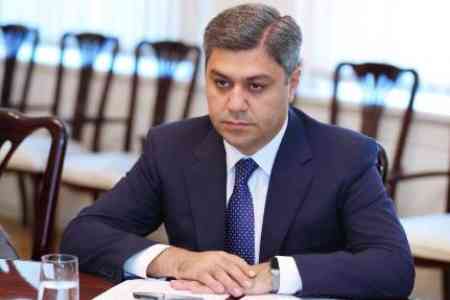 ArmInfo. <At a press conference in Los Angeles, Prime Minister Nikol Pashinyan again spoke about things that are poorly understood> - the former  director of  the National Security Service of Armenia Artur Vanetsyan said to the  Hraparak.am portal, commenting on the statement of Nikol Pashinyan  that Arthur Vanetsyan, having made a statement against his supreme  commander in chief, <threw his stars into the rubbish bin >.

<Despite the fact that after my resignation, he (Pashinyan) continues  to send people to me with a request to remain silent for a while so  that the situation would calm down, but now I see that he once again  violates the agreement and comes out with incomprehensible, in fact,  neither than not speaking populist statements.

Obviously, fascinated by the desire to make a short-term impression  on public moods, Nikol Pashinyan again does not think about the  consequences of his words. Can you imagine if I suddenly start  talking without thinking about the consequences? Well, but how much  can the public be misled by conducting the thesis that "who is not  with us is the enemy of the people"? And if someone does not agree  with this statement, then according to the Prime Minister, it means  that he acts on the order of the previous (authorities).

I spoke and will repeat again - do not try to connect me with the  former. It is logical that those who do not possess knowledge in the  military sector and are not familiar with the way of thinking of the  military, who have a superficial idea of their perception of duty to  the Fatherland, cannot know the significance of the officer's honor  and epaulettes for them. By the way, I remind you: according to the  Constitution, in non- wartime, the Prime Minister is not the Supreme  Commander. Sorry he went so far. I am sure those who carefully read  my resignation understood what I had in mind. Therefore, I affirm -  time will tell who or what will end up in the rubbish bin.  I am sure  that our people will no longer succumb to manipulative statements. In  my resignation, I said: let it be a call to stop. In all other cases,  debt to the Motherland will prevail. Peace and security to our  country. I have the honor> ", - said the former head of the NSS,  adding that he would inform about his future plans later.