Nikol Pashinyan in Los Angeles: At the moment, there is no de jure  reason to prohibit the exploitation of the Amulsar field 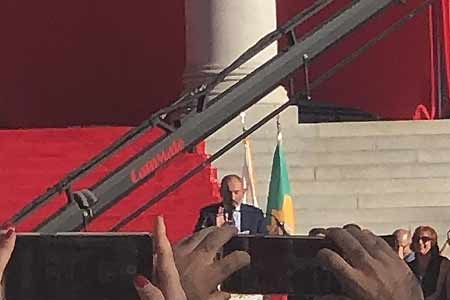 ArmInfo. Armenian Prime Minister Nikol Pashinyan is concerned about orthodoxy in Amulsar's issue. He said this the day before, September 22, during a press  conference in Los Angeles.

According to the prime minister, the greatest misfortune in Amulsar's  issue is that everyone already has their own opinion, no matter what.  "A part says that Amulsar is a mountain, and even if the world  collapses, it must remain a mountain, another part says that no  matter what happens, Amulsar should be exploited. I'm saying  something else: we must be honest with the Armenian and international  community and seek the truth to the very end. Is this an  environmental disaster or not, I must get an answer to this question  de facto and de jure. Many will now answer: "What are you talking  about? Is it not clear? "No. It is not clear," he said, recalling the  story of the Teghut field. "Members of the government also came into  my office, they said that I would immediately close the Teghout mine  that it was being destroyed, thousands would die ... but it turned  out that they were telling a lie," he said. As the Prime Minister  pointed out, the Amulsar issue is very important from both an  economic and environmental point of view. "I did not set the task of  opening or not opening the mine. I said that it was necessary to look  for the truth. I told the Lidian representatives that if it turns out  that we can operate the mine according to the standards that they  speak of, I will support them, but if not, it's excluded that I  support them, "said Pashinyan.

According to him, in the question of Amulsar he is concerned about  orthodoxy, "when they say: it should be so - that's all." "It is  necessary to make a decision, being informed," he said. As the head  of the Cabinet emphasized, the government will not make a decision  under the pressure that will be stronger. "I have never acted under  pressure, and I will not act regardless of anything. My problem, my  position is clear: we must be honest with the Armenian society and  with the international community. And to be honest, we must follow  truth to the end, "said Pashinyan.

As the prime minister pointed out, at the moment there is no de jure  reason to prohibit the exploitation of the Amulsarskoye field. "Maybe  in half an hour it becomes clear that this reason has appeared. If it  turns out that we have no interest, we will close the mine. But if  there are no reasons, then only because the government is under  pressure, we will not close it .

Recall that the Prime Minister of Armenia Nikol Pashinyan on  September 9 live Facebook said that at the moment there is no legal  basis to prohibit the operation of the Amulsar mine. Nikol Pashinyan  also formally called on the residents of Jermuk to unblock all roads  leading to the Amulsar mine. Meanwhile, on August 19, experts at  Earthlink & Advanced Resources Development (ELARD) said during a  video conference that the Lidian source data was not complete and, in  general, the 2016 EIA was insufficient to guarantee the  environmentally sound operation of the mine.

As Pashinyan assured, the Lidian leadership committed themselves to  100% safe operation. In addition, he said that he ordered the  inspection body to study the project in detail, and the criminal case  in the UK (under Art. Concealment or intentional misrepresentation of  information on environmental pollution), previously entrusted to Yura  Ivanian, a relative of the former Minister of Ecology Aramais  Grigoryan, who approved the assessment of the impact of the  development Amulsar to the environment, transferred to the deputy  head of the Investigative Committee to Arsen Ayvazyan. "A new  investigation team will be formed, which will consider the facts,  give answers to questions in the framework of the criminal case,"  Pashinyan said. In response, environmentalists, activists and  residents of the resort town of Jermuk said they were not going to  unblock the roads leading to the Amulsar field. "We do not understand  the position of the prime minister who agreed to open the mine solely  on Lidian's honest word for 100% safe its operation, "said the  residents of Jermuk, stressing that they would negotiate exclusively  around the closure of the mine.