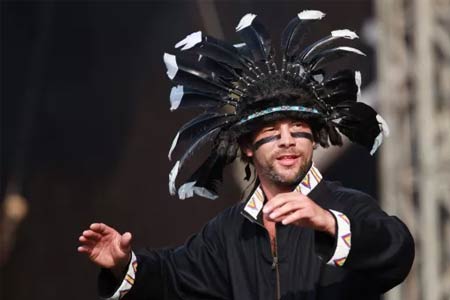 ArmInfo. The legendary  Jamiroquai band eagerly await their first concert in Yerevan. The  long-awaited large-scale event will take place on November 6 at  6:00pm at the Hrazdan stadium in Yerevan.

<2019 turned out to be wonderful and filled with wonderful concerts.  There are many other events ahead.  We are extremely encouraged by  the upcoming visit to Armenia and want to see our Armenian fans in  the fantastic 2801-year-old Yerevan. We look forward to our meeting>,  noted the artists of the Jamiroquai band.

Jamiroquai's concert in Yerevan will be held in accordance with all  international standards. Especially for the concert, unique lighting  and sound equipment will be brought to Armenia, analogues of which do  not exist in the region.

The Yerevan concert of Jamiroquai will be held as part of the Silk  Note Festival, which is a joint initiative of the My Step Charitable  Foundation and the International Association for the Development of  Cultural Tourism. The proceeds from the concert will be directed to  the reconstruction of cultural centers in the regions of Armenia.

To note, Jamiroquai are an English funk and acid jazz band from  London, formed in 1992. Fronted by singer-songwriter Jay Kay, the  band is best known for the song "Canned Heat" (1999), featured in  Napoleon Dynamite, and for the iconic music video for the 1996 single  "Virtual Insanity" which was named Video of the Year at the 1997 MTV  Video Music Awards. Their 1998 single, "Deeper Underground", reached  number one in the UK. All eight of the band's albums have entered the  UK top 10.  Three of them, along with their greatest hits  compilation, charted at number 1.