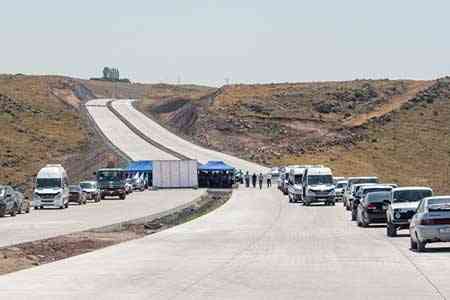 ArmInfo. Hundreds of employees  involved in the construction of the  "North-South Road" Program claim  debt for payment. This is stated in a statement circulated on Friday  September 20 by employees of 28 organizations working on the  North-South Road corridor investment program.

In addition, staff members are concerned about the media reporting  allegations of abuse in the North-South case.

To note, on September 20, in the "Zhamanak" newspaper with the  heading "Large-scale abuses" an article was published: "52 people may  be arrested in the North-South case". The "Zhamanak" newspaper,  citing its sources, in particular writes: "The abuse is so widespread  that the Investigative Committee does not dare to indict more people,  fearing that as a result it may be understood that there is no person  who would deal with the construction this road and did not  appropriate funds".

In this regard, the "North-South Road" Program employees believe that  the publication contains language that discredits the honor and  dignity of employees and their good reputation. As noted in a  statement of about 850 employees involved in the construction of the  highway, since September 2018 they have not received their salaries.

<On May 30, Varag Siseryan, head of the office of RA Deputy Prime  Minister Tigran Avinyan, met with employees of the North-South  highway construction companies and promised to solve our problem  within 45 days. However, 120 days have already passed, we met with  Siseryan several times, he told us that the issue is in the process  of being resolved, but there is no result yet, "the statement said.

The statement also attached a list of data from 28 contracting  organizations indicating the amount of debt.

It should be noted that in the framework of the preliminary  investigation in the criminal case on the abuses committed during the  implementation of the North-South road corridor construction program,  charges were brought against the brother of the third President of  Armenia Serzh Sargsyan Levon Sargsyan. Yesterday it also became known  about the detention of the executive director of the "Multi Group  Concern"  Sedrak Arustamyan.

Earlier, ArmInfo reported in the course of Yerevan-Artashat of the   transport corridor "North- South", which corridor was commissioned at  the end of 2015, cracks were found. Meanwhile, according to the  actual estimate of $ 2 million per 1 km. the road was supposed to be  magnificent. The Spanish company Corsan Corviam carried out work on  this site. The situation is no better on the Talin- Lanjik section,  which is being built by the Chinese "Sinohidro Corporation" company,  which has committed numerous violations. Armenian Deputy Prime  Minister Tigran Avinyan even admitted the possibility of corruption  risks in the actions of the Chinese company.

It should be noted that in 2018, $ 47 million was allocated for the  continuation of the North-South transport corridor program. Funds  will be raised in the form of credit resources from the Asian  Development Bank, European Investment Bank and Eurasian Development  Bank, another 2.8 billion drams received as the grant from the  European Investment Bank. The main area of work next year will unfold  on 84 km of the highway, on which it is planned to lay concrete on  40-45 km. Work, in particular, will be carried out on a section of  the road from the cities of Ashtarak to Gyumri. As a result, the road  from 2 lanes will expand to 4, and concrete will be laid instead of  asphalt.

According to current estimates, the construction of the entire 556-km  North-South highway, which stretches from Bavra to Meghri, will cost  more than $ 2 billion, since its only southern section, between the  cities of Artashat and Meghri, according to preliminary estimates it  will cost $ 1.5 billion. Meanwhile, five years ago, in September  2012, when the construction of the motorway began, the amount that  representatives of the Armenian government called was more than half  that - $ 962 million.

To date, 150.3 million dollars and 23.14 million euros have been  spent. At the moment, only a 31 km section has been built and  modernized, for which $ 70 million has been spent. The remaining  amount was allocated for excavation work on the Ashtarak-Talin and  Talin-Gyumri sections. Concreting works were also carried out on the  11 km road. The construction of the corridor was originally planned  to be completed in 2019, however, as RA Minister of Transport,  Communications and Information Technologies Ashot Hakobyan stated the  day before, the deadlines are postponed for 5-10 years. Under the  North-South program, the Armenian government calculated the  preliminary savings of $ 2.5 per hour for each passenger and $ 1 per  hour for the transportation of a ton of cargo. As the Armenian  authorities expect, the program will allow the country to mitigate  the consequences of the blockade by Azerbaijan and Turkey in the  future, as the   transit state in the cargo transportation of the  countries of the region, as well as join the Black Sea ring highway.