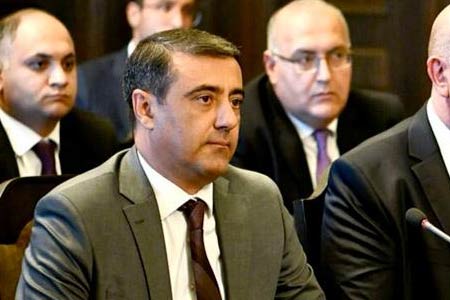 ArmInfo.On September 20, the Prime Minister of Armenia Nikol Pashinyan introduced to the senior staff of the National Security Service (NSS) the interim acting  director of the Service Eduard Martirosyan.

According to the Prime Minister, the NSS is an established  institution. "But you and I agreed that our ambitions will grow  consistently, and no matter how the structure takes place, our goal  should be the continued development of the level of her  professionalism," Pashinyan said. He added that everyone in Armenia -  from the prime minister to the ordinary citizen, should work on a  daily basis to improve their intellectual and professional level.  After all, this is the key to progress, he noted.

Eduard Martirosyan, in turn, noted that it is a great honor for him  to lead the structure in which he has been serving for more than 20  years. "I assure you that high-level professionals dedicated to their  homeland serve in the SNB," he said. According to him, everything  will be done to ensure stability in the republic, welfare and  security of the citizens of Armenia and Artsakh and the unity of the  nation.

The Prime Minister of Armenia held the final part of the meeting  behind closed doors.  Recall that on September 16, 2019, Nikol  Pashinyan signed a motion for the resignation of Artur Vanetsyan from  the post of director of the National Security Service (NSS) of the  Republic of Armenia. "This happened as a result of several  discussions with the director of the National Security Council and by  mutual agreement. We discussed several scenarios of further  activities of Mr. Vanetsyan. At the moment, I think Mr. Vanetsyan  will focus on the issue of national and state importance on the  withdrawal of the Armenian football team in the final of the European  Championship, "said Pashinyan. When asked if he was dissatisfied with  Vanetsyan's work, Pashinyan replied: "The work of the head of the  National Security Council is not a work that can be discussed  publicly." The corresponding decree was signed by the president on  the same day.

It should be noted that Eduard Ashotovich Martirosyan (b. 1974) has  been serving in the national security bodies since 1998. On October  16, 2018, by decree of the President of the Republic of Armenia, he  was appointed deputy director of the NSS. He has the rank of colonel.