Garegin II: Residence of the Patriarch - home for all Armenians 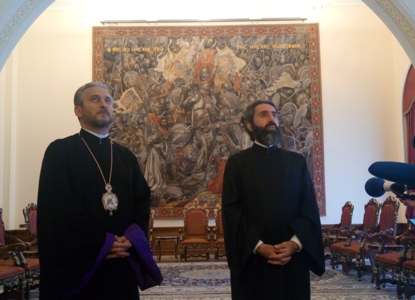 ArmInfo. With the support of the President of the Tashir Group of Companies, philanthropist Samvel Karapetyan and his wife Eteri Karapetyan, the capital  restoration of the Residence of the Patriarch - Catholicos of All  Armenians and the construction of a concert hall and chapel in the  courtyard of the Holy Etchmiadzin Monastery were completed on  September 18.

As the director of the Museum and Archives of the Mother See of Holy  Etchmiadzin Priest Asogik Karapetyan noted, construction work and  reconstruction began in 2009. In total, the Karapetyans family sent  about $ 30 million to carry out the planned work. Academician Hrachya  Poghosyan acted as the architect of the concert hall and chapel,  which is decorated with bas-reliefs of the Apostles, and Ashot  Arshakyan acted as the patriarch's residence itself.

Karapetyan emphasized that all relics, as well as paintings and books  are gifts to the Echmiadzin Monastery from compatriots from all over  the world. In addition to portraits of the Catholicos of the  19th-20th centuries, the walls of the Residence are decorated with  works by Hovnatan Hovnatyan, Stepanos Nersisyan, Yeghishe Tadevosyan,  Fanos Terlemezyan, Hovhannes Aivazyan (Ivan Aivazovsky), Rudolf  Khachatryan, Minas Avetisyan and other famous painters. The Gospel  and other relics are also stored in the Residence, in particular, the  gold-clad Armenian alphabet and a flourishing cross, made on the  initiative of Vazgen I - Catholicos of all Armenians, patriarchal  mitres, wands, staves, panagias, etc.

The restored halls allow not only holding events, but also hosting a  large number of guests. In total, according to Asogik Karapetyan,  overhaul was carried out in 64 rooms of the Patriarchal residence,  where the furniture was completely replaced and the necessary  technical equipment was provided.  In turn, the Catholicos of all  Armenians - Garegin II, in an interview with reporters, said that the  Residence itself was built almost a century ago at the expense of the  famous Armenian benefactor Alexander Mantashyan. The author of the  project was Izvestia architect Pogos Zohrapyan. However, for a long  time the Residence did not serve its purposes, but was a military  hospital. Only in 1962, through the efforts of Vazgen I, the  Residence was returned to the Mother See of Etchmiadzin. "We are  happy that, thanks to the great philanthropist Samvel Karapetyan,  today we have the opportunity to see the thoroughly restored  historical building, as well as the chapel and concert hall in the  Residence complex," he said. Continuing what was said, Garegin II  noted that in Armenia today, unfortunately, there are many churches  in need of restoration.

<The doors of the Residence will always be open to the entire  Armenian people, and each person can personally turn to the  Catholicos. This is part of the integral mission of our Residence,  which is the home of all Armenians> - he concluded.

Recall that the Etchmiadzin Cathedral is the main temple of the  Armenian Apostolic Church (AAC), the throne of the Supreme Patriarch  of all Armenians in 303-484, and again from 1441. Located in the city  of Vagharshapat, Armavir region of Armenia. Since 2000, it is  included in the UNESCO World Heritage List.  It is one of the oldest  Christian temples in the world.

It should be noted that Samvel Karapetyan, President of the Tashir  Group of Companies, headed the rating of billionaires of Armenian  descent according to the Russian Forbes version. The publication  estimates its income for 2018 at $ 3.7 billion, among the richest  people in the world Karapetyan takes 568 place from the list of 2153  world billionaires.