Aram Manukyan: The criminals are in the dock. Robert Kocharian: This  is the most shameful criminal case in the history of Armenia 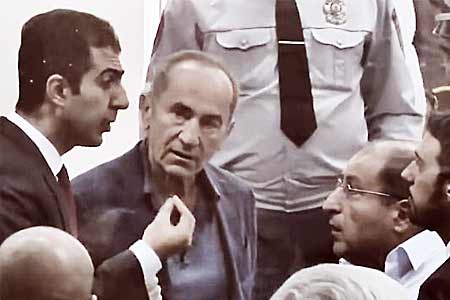 ArmInfo. The criminals are sitting in the dock; they have committed a crime against the Armenian people. This was stated today at a meeting of the court of general  jurisdiction of Yerevan in the case of the second president of  Armenia Robert Kocharyan and other former dignitaries, said Aram  Manukyan, member of the Armenian National Congress party, former MP  of the National Assembly of Armenia.

It should be noted that in addition to the second President of  Armenia, the court session is also attended by former chief of the  General Staff of the Armed Forces of Armenia, former CSTO Secretary  General Yuri Khachaturov, the former Defense Minister Seyran Ohanyan  and former Deputy Prime Minister of the Republic Armen Gevorgyan.

Manukyan called important the fact that society reacts and organizes  protests in court, demanding imprisonment. "This is a problem of  public dignity, our society must destroy the possibilities of such a  crime," Manukyan said.  In his opinion, the events of March 1, 2008  are not a legal process, but a historical crime against the Armenian  people.

Meanwhile, speaking at a court hearing, Robert Kocharian called the  case brought against him political persecution and the most shameful  criminal case in the history of Armenia. He also expressed the  opinion that in the future this criminal case will be written in  textbooks, and the case will have both its negative and positive  characters.  Addressing the presiding judge Anna Danibekyan,  Kocharyan emphasized that Danibekyan was writing another page in the  history of this criminal case, and what this page would be like it  depends on her..

It should be noted that today the trial of the second president of  Armenia has opened. The court examines the defense's arguments and  the allegations regarding the presidential immunity and the  termination of the criminal case in the light of the recent decision  of the Armenian Constitutional Court.