Protest rally in protection of Amulsar is taking place in Yerevan. 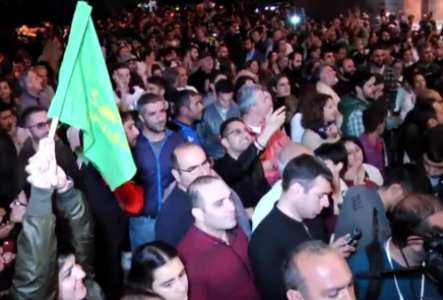 ArmInfo. A protest rally  in protection of Amulsar is taking place in Yerevan.

Activists, environmentalists, ordinary citizens began the march from  the park adjacent to the National Assembly, where they were already  met by an enhanced police cordon.

From the National Assembly, the procession marched along Baghramyan  Avenue to Mashtots Avenue and further to Republic Square.

Activists made a short stop in France's square, and ecologist Ani  Khachatryan made a statement on behalf of many attendees, who accused  Armenian Prime Minister Nikol Pashinyan of abusing power, betraying  the values of the revolution and continuing the policies of the  previous authorities. Khachatryan emphasized that the Lydian company,  which was entrusted with the development of Amulsar, misinformed the  authorities, the public and its own creditors. "However, the prime  minister does not want to see this.  Pashinyan provides the highest  level of protection for the company. This is a blatant fact of abuse.   Pashinyan and his government are responsible for the fact that at the  expense of the entire population of the country, some corporation  will profit by blackmail, and Pashinyan's statements create fertile  ground for Lydian's actions. Most of the population does not believe  the arguments about the safety of the mine, while the government's  legitimacy is threatened. Amulsar's defenders will make every effort  to protect the rights and AIAM citizens ",  Khachatryan said.

Then the procession continued its movement, activists moving along  Mashtots Avenue to Republic Square chanting: "Amulsar will remain a  mountain", "Amulsar is only a mountain", "We are the masters of our  country", "Amulsar without a mine". The procession is accompanied by  law enforcement. Several hundred people participate in the protest.

To recall the Prime Minister of Armenia Nikol Pashinyan on September  9 live Facebook said that at the moment there is no legal basis to  prohibit the operation of the Amulsar mine. Nikol Pashinyan also  formally asked Jermuk residents to unlock all roads leading to the  Amulsar mine.

As Pashinyan assured, the Lydian leadership committed themselves to  100% safe operation. In addition, he said that he ordered the  inspection body to study the project in detail, and the criminal case  in the IC (under Art. Concealment or intentional misrepresentation of  information on environmental pollution), previously entrusted to Yura  Ivanian, a relative of the former Minister of Ecology Aramayis  Grigoryan, who approved the assessment of the impact of the  development Amulsar to the environment, transferred to the deputy  head of the Investigative Committee to Arsen Ayvazyan. "A new  investigation team will be formed, which will consider the facts,  give answers to questions in the framework of the criminal case,"  Pashinyan said.

In response, environmentalists, activists and residents of the resort  town of Jermuk said they were not going to openthe roads leading to  the Amulsar mine. "We do not understand the position of the Prime  Minister, who agreed to open the mine solely on Lydian's" honest  Injun "on 100% safe its operation, "said the residents of Jermuk,  stressing that they would negotiate exclusively around the closure of  the mine.

It should be noted that despite Lydian's assurances that about $ 400  million of the authorities have already been invested in the project  and another $ 450-500 million will go to the state treasury within 10  years of the mine's operation, local ecologists do not share the  government's enthusiasm about the attractiveness of the plan mine  exploitation. Environmentalists fear that the exploitation of the  mine,, during which sodium cyanide will be used, could lead to the  oxidation of water in rivers. Contaminated waters will become  unsuitable for drinking and irrigation and may cause irreparable harm  to the mineral springs of Jermuk and the ecosystem of Sevan. In  addition to the water basin, the public is also concerned about the  possible presence of uranium reserves in the mine.  .367 в®­­ бҐаҐЎа   б® баҐ¤­Ё¬ б®¤Ґа¦ ­ЁҐ¬ 9.29 Ј ­  в®­­г.  ЏаЁ нв®¬, ® б ¬®¬ га ­Ґ - ­Ё  б«®ў . -0- So, in his work "Uranium bearing of geological formations  in Armenia", the famous scientist, Doctor of Geological Sciences  Petros Aloyan noted that the Amulsar manifestation of uranium is  located 4 km south- east of the village of Ketchut and 5 km  north-west of the top of the mountain of the same name.   Approximately 76 tons of uranium were calculated for five sites of  the Amulsar occurrence, and taking into account uranium in the  thorium site, its total reserves can be estimated at 100 tons.  Moreover, according to the research of another scientist, Professor  G.S. Avagyan, according to 40 samples of Amulsar ore, there are 195  tons of uranium and thorium there. Meanwhile, the development of  uranium deposits requires special permission from the government,  which Lydian does not have. According to the company, the mine  contains about 73733 kg of gold with an average grade of 0.78 g per  ton, as well as 294.367 tons of silver with an average grade of 9.29  g per ton, at the same time, not any word about uranium itself.