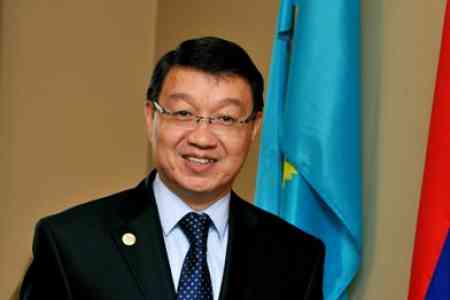 ArmInfo. Attempts to  distort the history of World War II force us to conduct such events.  on September 11 in Yerevan at the conference "Peace on the eve of  World War II" dedicated to the 80th anniversary of the outbreak of  World War II, Kazakh Ambassador to Armenia Timur Urazaev stated.

According to him, of course, such events would not have been carried  out if they were not needed. "Of course, in those years, military  operations did not cover the territory of Kazakhstan, but the Kazakh  SSR was a forge of the rear. Kazakhstan became a refuge for refugees.  We can say that Kazakhstan shared the last piece of bread with our  Soviet brothers. We're not talking about more than 1.5 million Kazakh  people who left for this war, a third of whom did not return, " the  Ambassador said.

Touching upon the internal system of the Soviet Union and the actions  of its leadership led by Stalin, Urazaev emphasized the  inadmissibility of attempts to equate Hitler and Stalin. At the same  time, the Ambassador added that maybe these very methods of action by  Stalin, with their pluses and minuses, became a kind of bonding  moment that allowed to win this war.

"Unfortunately, many pages of this story are trying to be rewritten  for the sake of the political situation.  Everything that we hear  today about the history of World War II is politicized. But it is  worth noting that political trends are prone to rapid changes and  transformations, and for 10-20 years it will change so much that we  will encounter a completely different color than the current one. We,  as the descendants of this story, have a moral responsibility to  prevent distortion of history, so that it is respected and protected,  "the Ambassador of Kazakhstan emphasized, stressing the need to  continue preserving a cohesive approach on this issue.   In turn, the adviser to the Embassy of Belarus in Armenia Vyacheslav  Lisukha recalled that Belarus knows firsthand about this war, in  which it lost a third of its population and recently celebrated the  75th anniversary of liberation from Nazi invaders. "In this regard,  Belarus's position on the attempt to falsify history, to rethink it,"  he said, adding that September 1 marks the 80th anniversary of the  start of this terrible event, which involved 80% of the world's  population, and which affected 60 countries, and military operations  swept the territories of 40 countries and claimed the lives of,  according to various estimates, from 60 to 80 million people. "The  beginning of World War II was preceded by many political factors. The  Versailles accords did not suit Germany at all. The Nazis created not  only a powerful army, but also a fascist bloc," the diplomat said.   At the same time, he emphasized that, despite ambiguous assessments  of the Molotov-Ribbentrop Pact, it is important to point out the fact  that the document allowed for almost two years to delay Hitler's  attack on the USSR and strengthen the country's defense. "The war was  a severe test for our peoples, who in a single system courageously  defended their right to freedom, independence, defended the world at  the cost of their lives. 80 years have passed since the Second World  War and humanity has no right to allow a recurrence of this kind of  disasters. World stability and security can only be ensured by joint  efforts, even in the presence of serious disagreements, "summed up  Lisukha.